Some One is Addicted to Legos!

Mica flies his Advengers Quinjet and his Chima Raven all over the house. He's loaded with sound effects! 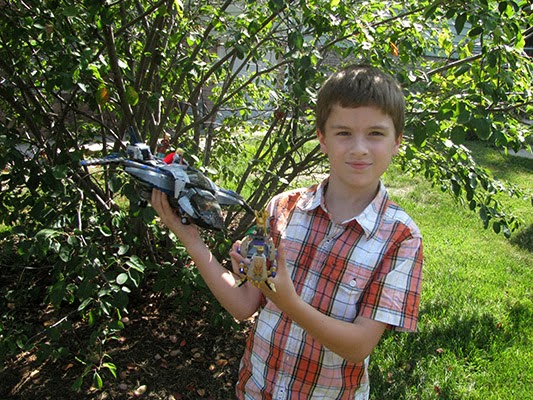 Now he wants Lone Ranger sets. He's never seen any movies old or new on the Lone Ranger. He knows every character and facts about Lone Ranger from his Lego magazine. One day he talked for 10 minutes straight on the phone to Grandma and Grandpa about the Lone Ranger.

The other day I was looking at things on Amazon. It stores your previous views. Of course I viewed a few Lego sets for Christmas time. Slap me silly, Mica was staring at my screen and saw my previous viewed things.

I'm hardly on the blog around him in fear he'd see a post like this that says what he's getting. It's for him to read when he gets older.

He was like, "I want to see the Lone Ranger sets!" Push the over button Mom, "WOW they make the Back to the Future Delorean?! I want that!" Well I wanted that to be a complete surprise. Dam you Amazon!

Later in the car Mica said, "When we get home can we go back to look at Am I iss n?"

He said, "You know the thing on your computer, where we looked at the Lego sets. Am I iss n."

He said, "Ya! I want to see all the Lone Ranger things and the Delorean! I want all that stuff!"
Posted by An Apel a Day at 11:05 PM

Email ThisBlogThis!Share to TwitterShare to FacebookShare to Pinterest
Labels: Back to the Future, Delorean, legos, Lone Ranger

That's so awesome about the Amazon thing!!! I love when they come out with things that you didn't even know they knew about like that.

We are a big Lego family, too. My kids have numerous sets and love playing with them. When we go to Disney in a few weeks, there is a HUGE Lego store there that they look forward to going to almost as much as actually going to one of the parks. Chris & I got them each a gift card for there for their birthdays last month and it's been killing them having to wait to spend it lol.

We love Legos too. They are soooo expensive though.

My nephew Jake is obsessed with Leggos!!

That damn Amazon ruins Christmas for me every year! Jason puts stuff in his wish list in HIS account. I get into MY account on MY laptop, buy a gift off the list, then they update his list to "someone may have bought this for you". So he knows what he is getting every year lol.

He used to have an obsession with those Legos. I'm kind of glad my girls never got into them. I hear they hurt like hell when stepped upon lol!

We never had Legos. I don't know if they were not invented back then or we just didn't know they existed.

I have had the same thing happen, but with hubby!! There must be a way to turn that feature off!

broxton is loving lego's now..
he loves them, but can't really build the sets yet... soon enough, i am sure...
mica did GREAT on that one

I must confess that I love leggos as well. I like to play with my nephews :)

If they had legos that were that cool when my Daughter was growing up.... she might be addicted to them too... maybe not though being a girl