Mica this last weekend roll played that he's part of a sculpture outside the Nelson Atkins Art Museum in Kansas City. 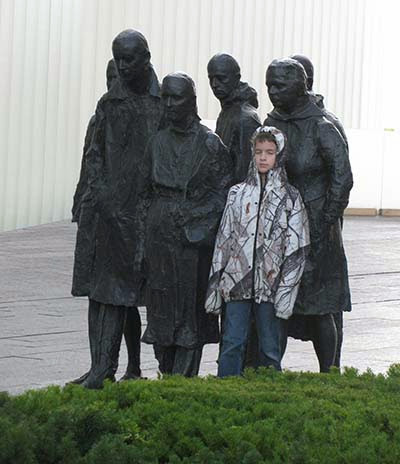 His teacher greeted us by saying, "You both have such a wonderful son!" That's nice to hear. We live with the little tike all the time. We only get to observe other kids his age sometimes.

Grading systems are so odd. It used to be A, B, C, D or F. Then it was 1, 2, 3, and 4. Now it's O for Outstanding, S for Satisfactory, N for Needs Improvement and U for Unsatisfactory. Whatever the grading system is, they kind of mean the same thing.

Mica got mostly O's, and a few S's. His teacher said that Mica was the only one in the class that got O's for a few things. He got the S's because they haven't attempted to do the things that they were graded for.

His reading level is about as high as a fifth grader. I mentioned that Mica is stuck on wanting to read the Magic Tree House series. I asked if that's a problem that he only wants to read those books? She said at this age as long as he's reading, she's happy.

I guess if they do really well in gym, they get an extra gym. I would have thought of that as a punishment when I was a kid. Mica was super excited about it. He had an extra gym that day, and was all happy and sweaty afterwards.

The one thing we talked about for awhile is that Mica tends to rush things sometimes. His teacher didn't see this at all.

He used to rush swimming. Instead of getting his strokes right he tried doing them fast. Sometimes he's the same way with homework.

Daddy showed Mica's teacher some of his worksheets from class. Mica has one answer that that is wrong on about 5 of them. I guess the process is that Mica's supposed to go up to the teacher with his work, she checks it, and if he has something wrong he's supposed to erase it and fix it. Well he hasn't been doing the erasing and fixing part. I told his teacher, "Maybe now you want to go back and change his grades." We all laughed.

His teacher now gets the fact that Mica rushes through his work sometimes. After the conference I told Mica he did well. I asked him why he hasn't erased his wrong problems in the class, and fixed them? He told me that he has. I said, "No I see no erased marks on there." We'll have to make sure he follows through.

Sounds like he is doing great! I hate the 1234 thing. They do that at pierce's school too.

I love the Magic Tree House books! :) You've reminded me that I need to find my old books from mum's place and bring home to read with Lil Pumpkin.. we're gonna have her PTC next month. Quite curious to hear what her teachers have to say about her too haha

That's great that his reading level is so high! I am glad to hear he's doing well in school and yay for finding the jacket!

Congrats to him on a job well done too! the statue picture is funny. :)

great job on raising those boys :)
that photo is hilarious...I was wondering what it was about

Mica is doing awesome! We used to to the S, O, U grading thing too, but they ended up switching it to the ABC system, which I like better!

Great that both the kids are doing well in school, one thing less you have to worry about.