I'm not here to spoil a movie for you. Have you seen the Lego Movie yet?

We tried going on Sunday. I wanted to try going to this theater that was newly remodeled. We went at 11:30 AM, and they didn't have any seats seats other than in the front row until 3:30 PM. I know it just came out on Friday, but I wasn't expecting it to be so busy on a Sunday morning.

Off to another theater we went. Daddy left his Smart fancy phone at home. We only had my old school one 99 cent one. He was highly irritated. He says that leaving his phone at home is like leaving his keys behind. The next theater we went to had only a birthday party in the parking lot. I guess they didn't open until 12:30. There was no sign saying their hours. Since Daddy didn't have his phone he couldn't look online at tickets, and hours of operation.

We rushed home so Daddy could get tickets online. I made lunch. 1:30 was our scheduled destination.

After all that rushing...we got to the theater, and there were only two other families there. The theater did end up getting full. There were a lot of people coming in closer to the movie. I don't know if the seating wasn't busy because the theater we went to was in a different part of town, or if it was because it didn't have stadium seating like the other theater? Regardless the reason we got good viewing seats. Our boys went from disappointed, to being happy. 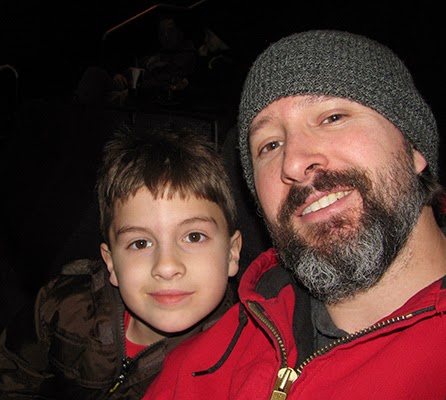 Isaak was sticking his tongue out in one, and kissy face in the other. Goof ball! 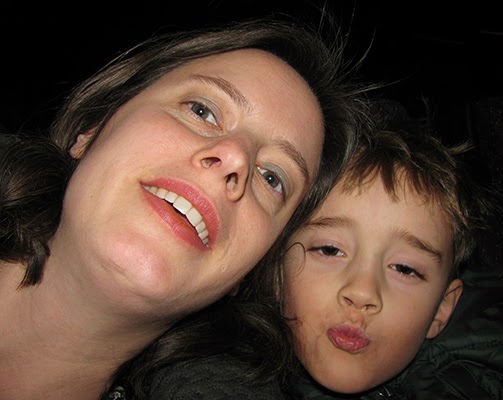 The boys loved the movie! They have it offered in 3D, which we saw the regular one. Isaak hardly wants to keep the 3D glasses on. I imagine the 3D version is sweet!

The message is positive. It's about one group of people wanting to leave things the same all the time, and others wanting change.

The boys went home and played with Legos until we had dinner ready. :)
Posted by An Apel a Day at 10:12 AM

We saw it yesterday too. Action from start to finish. :)

We were up in New Hampshire all weekend, so we never got to see it. I think we are going this weekend!

I think I am the only one in our family who wants to see this one. I will have to wait until it's on dvd to rent it for myself lol. Glad everyone enjoyed the show!

I'll be you even money my wife and I go see that. Unless she can be absolutely sure a movie is going to end happily, she won't watch it. I have to go see a lot of films like All is Lost on my own, or wait til they come out on Direct TV.

My sister is taking her son to see it this weekend. He's obsessed with Legos lol.

I've heard nothing but good things about this movie. I'm sure my boys would love it. It isn't in our budget to go to the movie theatre, but hopefully once it comes out on dvd we'll get to see it.

Sorry you had a hassle with tickets. That happened to us the first time we tried to see Frozen. I took my son to see the LEGO movie this past weekend, and we LOVED it! And now, my son can't stop talking about it.

I have been hearing a lot about the Lego Movie and I do know adults who want to see it. Legos have been popular for such a long time now. They are a hot item!twinkle at optonline dot net

I've been seeing a lot about this movie. I am sure my Grandson will want to go.

Been hearing rave reviews about it.. everything is awesome!! haha.. Glad you all had a good time :)