We used to play a game when I was little called MASH. Each letter stood for something: Mansion | Apartment | Shack | House. There was more to the game. Somehow in the end we'd know where we were going to live as an adult, what kind of car we'd drive, and what we were going to do for a living. It's like we had it all figured out before it happened.

We also used to fill out Mad Libs. Those made us laugh for hours!

Playing with words was always fun! This giveaway has you find out what your "Bizarro alter ego" name is. Just use the LEGO Bizarro name-generator app below, and with the click of a button, you get your own Bizarro alter-ego name!

My name is: alissa-slam-zarro-man. Type in your name to reveal your Bizarro alter-ego - If you don’t like your name, press the refresh button or try again!

Batman has joined the newly formed Justice League in order to keep tabs on Superman, a mistrust that is complicated by Superman’s clumsy – but well-meaning – clone, Bizarro. Bizarro’s creation of the Bizarro League has caused confusion amongst the world’s greatest Super Heroes, but an even greater and mysterious threat may force the Justice League and Bizarro League to band together to defeat evil. 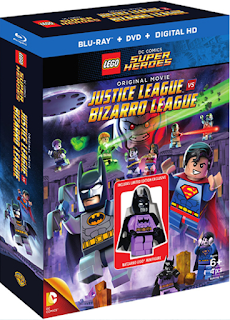 Giveaway is open to residents of the U.S. NO PO Boxes will be accepted. The giveaway will run through 3/2/15. Winner will have 48 hours to respond to winning email or a new winner will be selected.

Each household is only eligible to win LEGO: DC Comics Super Heroes: Justice League vs. Bizarro League (Blu-ray+DVD+Digital HD UltraViolet Combo Pack) Blu-ray via blog reviews and giveaways. Only one entrant per mailing address per giveaway. If you have won the same prize on another blog, you will not be eligible to win it again. Winner is subject to eligibility verification.

I did not receive the products mentioned above. Regardless, I only recommend products or services I use personally and believe will be good for my readers.
Posted by An Apel a Day at 10:56 PM

My Bizarro name is theresa-mega-zarro-borg but you can just call me awesome ;)

LOL My Bizarro name is TERRY-WONDER-ZARRO-BORG.

hahahaa..that sounds like fun..I don't have the bizzaro name yet, but I will think of one coz the link was off :)

hahahaa..that sounds like fun..I don't have the bizzaro name yet, but I will think of one coz the link was off :)

My name is ASHLEY-BAM-ZARRO-BORG, funny!

Hmmm...
I am noelle -bam-zarro-man

my name is:
anne kelly-mega-zarro-girl
thanks for the awesome giveaway!!
:) anne :)

My Bizarro name is BIRDIEBEE-BAM-ZARRO-DROID.