My SA: Kentucky Fried Chicken are hoping the new ads will polarize viewers. The CEO of KFC's parent company Yum! Brands Greg Creed said that one out of five people hated the Hammond ad campaign. But he added that it was great news "because at least now they have an opinion. They're actually talking about KFC, and you can market to love and hate; you cannot market to indifference."

I'm one of those that found that last Colonel to be creepy. Now they are switching him up again. Norm Macdonald — the veteran of Saturday Night Live, and a Last Comic Standing judge is taking over to be the next Colonel.

We hardly get KFC, but a few weeks ago we decided to. We needed a quick dinner. Isaak said, "This grosses me out!" What was it that grossed him out? The bone on the chicken. I know that chicken on the bone is more flavorful. We make almost every meal at our house. Often times I don't have the time to make chicken dishes with the bone, it's easier for the kids to eat chicken without the bone, we don't empty out our trash a whole lot because we keep a compost pile, so the bones stink up our trash. I think it was the visual that disturbed Isaak. I'm thinking Isaak should eat more chicken on the bone, so he doesn't always think chicken is boneless every time. 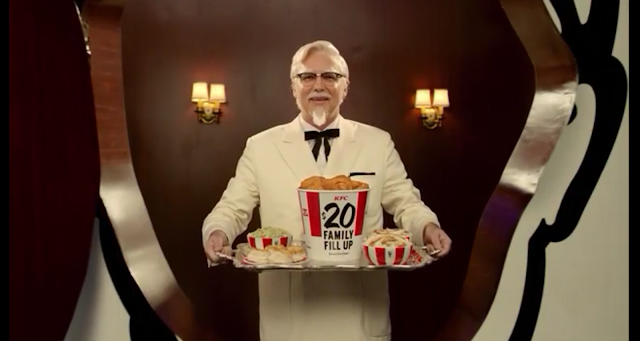 Do you eat boneless skinless chicken, or are you a chicken on the bone person?
Posted by An Apel a Day at 3:52 PM

Only boneless chicken for us. As far as the ad goes, I am appalled by it. I think the real colonel would hate them, too.

Sometimes the food tastes good there, sometimes it doesn't. KFC will always have a special place in my heart as that's where I met Jason. We both worked there as teens. Also, my dad ran our local KFC's, so it really did put food on our table growing up (not just chicken either lol). I eat it on and off the bone, though I prefer boneless/skinless chicken breast.

I like chicken, don't much care which way it's prepared. We have a KFC in town, ever so often I will stop in for lunch.

I am not a fan of meat on the bone either, so I get it ... when we eat chicken, marc normally pulls it off the bone for me. Or i pull just the top layer of meat off and give him the rest.

My daughter used to work at Kentucky fried chicken. That was when I was able to eat things like that.