Family Party in the Park

Once I found Benson Park in Omaha earlier this summer I knew I wanted to have Mica's family birthday party there. He wanted it there to.

Then I found out that my nephew teaches Karate on Saturday mornings, and church for a lot of people is on Sunday mornings. I was feeling down about how to make a park party work. Then my sister called to tell me that Karate wasn't going on one of the days. YAY it could still happen! Later I found out that it was supposed to be in the upper 90s, and people were worried about the older family members being outside in the heat. The crazy thing in my mind was that we've had family reunions at places that were in door/outdoor during that time of year. My Grandpa often sits outside with my Great Uncles during those events. With Mica's party we were having it for breakfast, so the heat wouldn't be bad.

I love my family, but often times with such a close net of people opinions are strong. I sometimes wish people would just go with the flow.

I'm sure I annoyed most everyone last week when I sent a text out that said the party was still at the park. If it got too hot we'd come back to the Apel house.

The park is where his party was.

Menu:
The lovely pavilion was taken, but we got a prettier spot by where the ducks like to hang out. It was in the shade, but not connected to a path, so I worried about my Mom, and Grandpa walking down there. Everyone got down and back up in 1 piece. 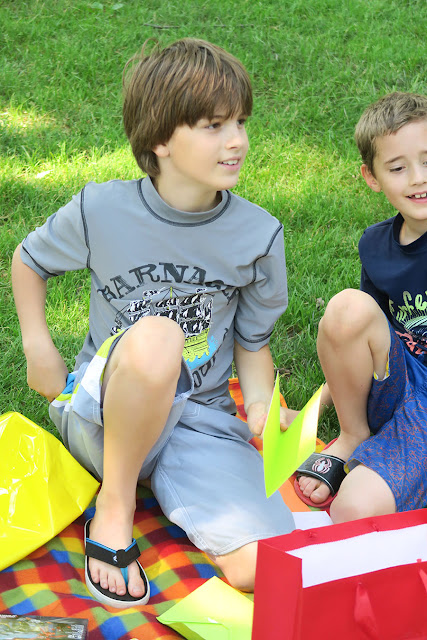 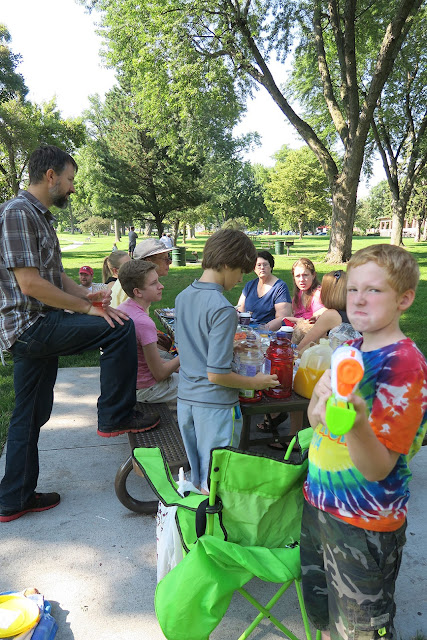 The boys played with a Nerf Football, and a Frisbee.  It's kind of hard to tell, but that's what they were doing. 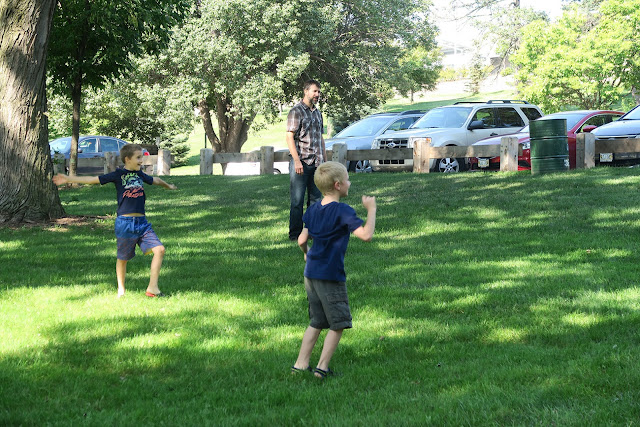 My Grandpa said, "Who's idea was this? It's so pretty here!" I'm glad he said that. I said, "It reminds me of where you used to live Grandpa. Remember when we were younger, we'd go to the park to feed the ducks?" He remembered. 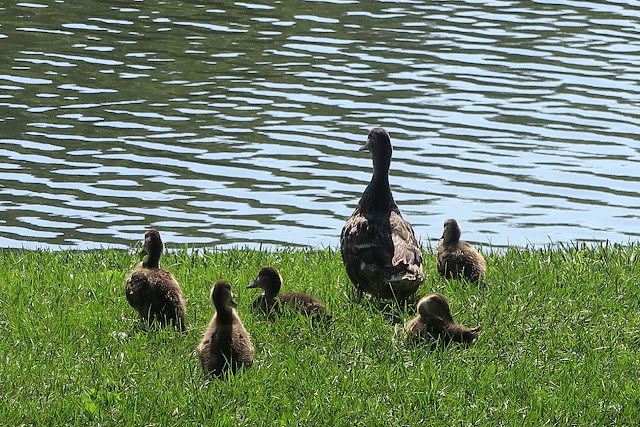 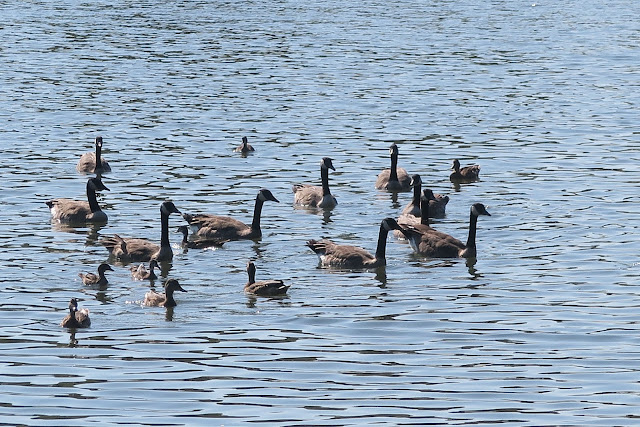 This is about as close as the boys could get to the baby ducks, without them running off. 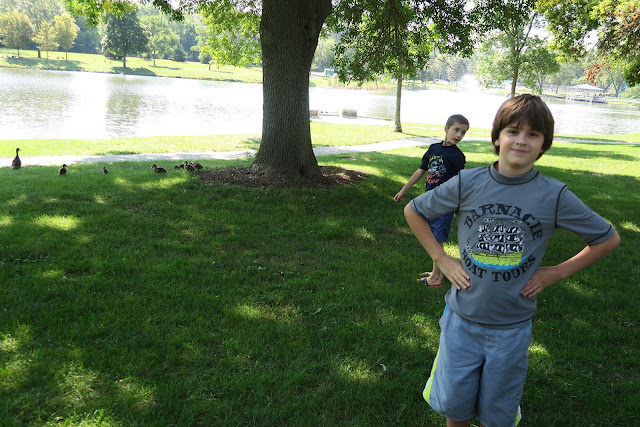 Mica tried to walk Edison around, but he was grumpy tired. About the only laugh I saw out of Edison was when Travis tried to tickle him with his beard. 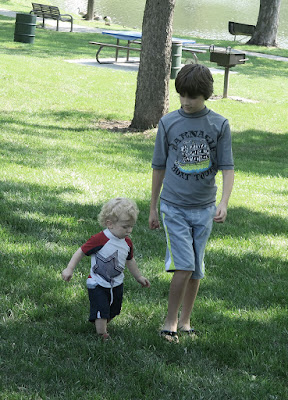 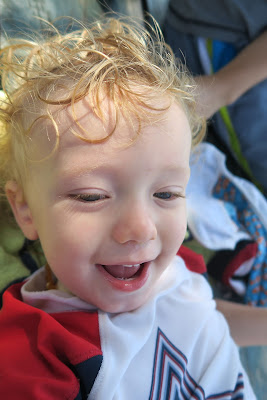 I had to smile because my Grandpa wrote, "Michael" on Mica's card. When people get older that kind of thing just happens. Mica giggled about it.

My parents now take the kids out prior to their birthday to have lunch, and get their present(s). Mica got some Lego things. I guess the Jurassic World set that he wanted was no where to be seen. He picked out a few different sets. My younger sister got him a Terrarium (which looks cool)! My older sister gives him a choice to go somewhere with her. My Aunt Becky gives the boys 20 $1 dollar bills. 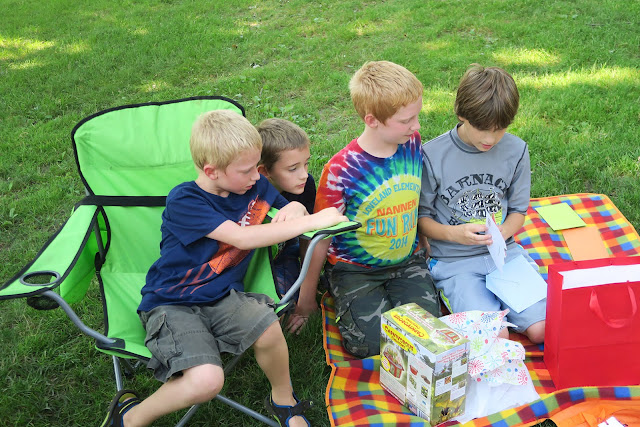 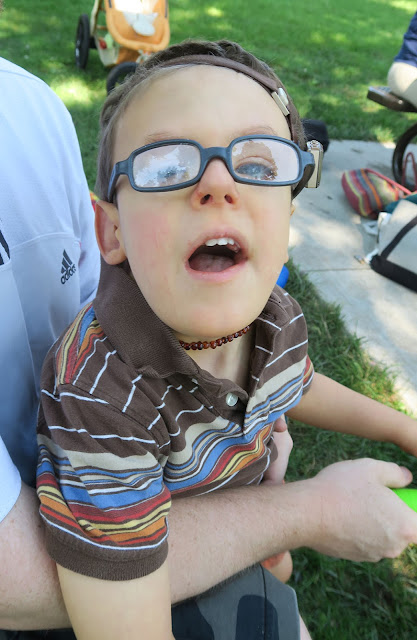 When the food, the ball, the Frisbee, and the present time was over Travis and I walked the little kids over to the splash pad.

My nephew Elijah was in what Mica calls the, "Force Field". 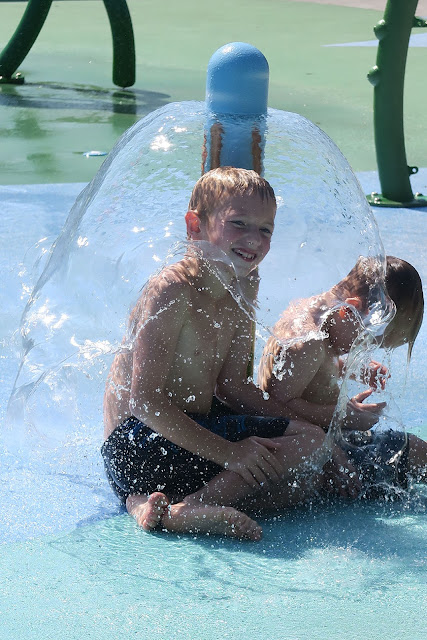 Travis found this baby Praying Mantis. I won't hold those things. I'm not afraid of bugs really. It's just that they are the master of the bug food chain. If you look them up you'll find that they are related to the Cock Roach. When they did that back prick test on me to find what I was allergic to, Cock Roaches was on the list. Yuck! 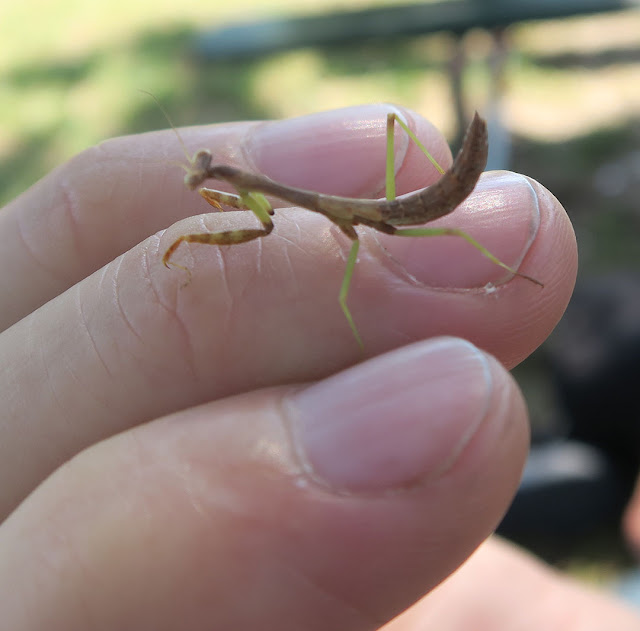 Evan found a dead butterfly with it's head off. 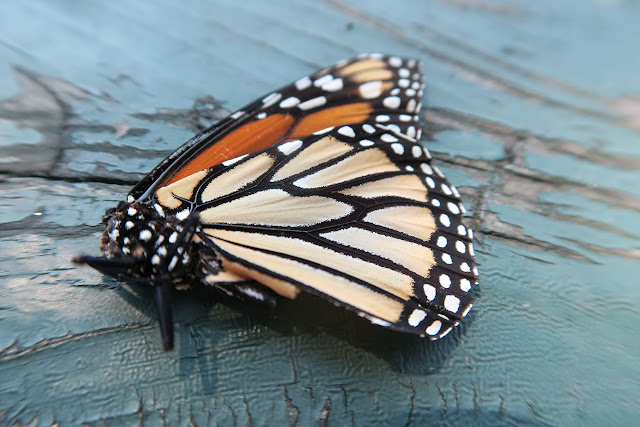 It was a good birthday party! Everyone enjoyed it, and no one got too hot.
Posted by An Apel a Day at 9:37 AM

Glad the party was a success! My boys would have been all abut the bugs, too - ew.

I'm so glad it all worked out! I'm lame and always just invite family to the house for birthdays.

I'm glad you had such a good time. And lol on the cockroach fact, I didn't know they were related.

So glad yall ended up having a great time. I know from the photos the kids had a great time!!!

what a blast! Looks like a great party you have there :)..all those bugs are just bonus :)

Well, I hope my comment went though. It took me straight to blogger when I hit publish. ugh! If not, I said I am glad everyone enjoyed the party!

Looks like he had a nice birthday party. I've had my kids' birthday party at parks before. I think parks are a nice place to hold events.

Sounds like a great birthday party to me. I have been trying to do as many things outside as possible. Not long from now it's going to be cold and I won't be able to get out much.