It was really great to visit The Rose Theater again! It's been awhile, since we've gone there.

Right now they are showing Peter Pan. I thought that would be a perfect musical to take 2 boys to. Off we went to Neverland.

Kind of hard to get a good photo with all the reflections and Mica kept making goofy faces, but I did my best. 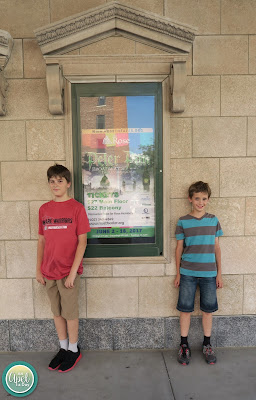 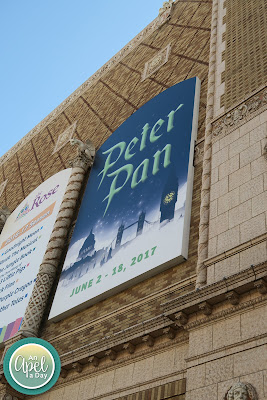 We got there early, so lucky us got some snacks. Mica stood over by The Rose Theater Timeline to read it, and Isaak traveled upstairs. 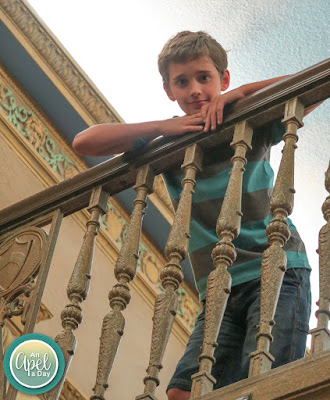 When we walked into the theater we saw that there was a live orchestra in front, and below the stage. There wasn't a whole lot of people playing, but it's always exciting when there's any live music.

The Rose Theater in its self is just a really beautiful building. It's named after a Nebraska icon, Rose Blumkin who opened Nebraska Furniture Mart. The theater is ornate. I love looking at the set designs that they come up with. I kind of wish the set would have been open to see, but they had the curtains closed.

Peter Pan is such a classic. Everyone at The Rose Theater did a great job bringing the story to life! 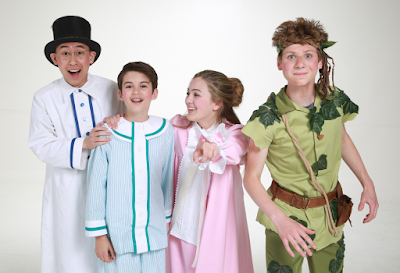 We were transported on a magical flight to Neverland were Peter Pan took flight. The classic story of the boy who never grew up, Peter Pan shares the story of a boy who escapes growing up by spending his life in the magical realms of Neverland. I've always loved that Peter wants to stay young and full of imagination. I'm always telling my students to go back to that point in their lives, so they will let themselves grown.

On a random flight to London, he encounters the Darling children: Wendy, John and Michael. They follow Peter on the adventure of a lifetime. Together with the Lost Boys, they do battles with the sinister Captain Hook and his pirate crew. 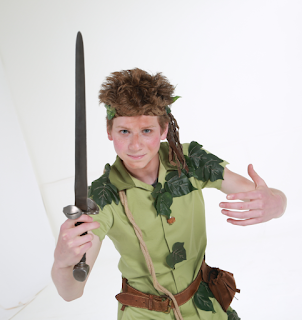 All of us who have read Peter Pan know that this story tackles what it means to be an adult and what makes childhood special. - Artistic director Matthew Gutschick

The show is at The Rose Theater in Omaha, Nebraska from June 2-18, 2017. Fridays at 7 pm, Saturdays at 2 pm, and Sundays at 2 pm. The June 10 show will be interpreted for people who are deaf or hard of hearing; this show will also include audio description services for audience members who are blind.

The Rose's production of Peter Pan is being led by guest director Amy Lane, whose work was last seen in The Rose's world premiere of Buffalo Bill's Cowboy Band.

Amy set out to bring a very traditional story to the stage, deeply inspired by Victorian-era fairy tale books. "This is truly the fairy tale version of Peter Pan," she says. "I almost imagine the design as a sort of pop-up book that the audience is invited into." I actually have a Peter Pan pop-up book, so this interested me.

The children fly away to Neverland, the scene unfolds into an almost Technicolor world, with scenic designs by Tim McMath. 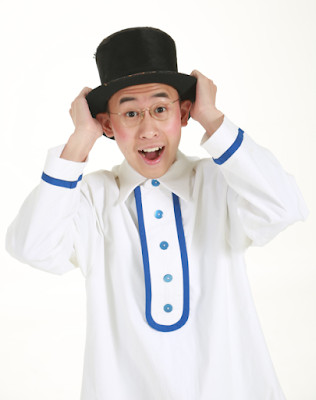 Peter Pan was played by 14-year-old Danny Deneberg, who was last seen on The Rose stage in the lead role of Ralphie in A Christmas Story.

Unique lighting techniques will be used by lighting designer Craig S. Moxon to bring the fairy Tinkerbell to life. "Traditionally Tinkerbell is done with a simple follow spot that darts across the stage, but I wanted to give her a bit more life," says Moxon. I kind of saw her to be a yellow spot lite, but they made her green.

Considered a musical masterwork, Peter Pan features orchestrations from the Broadway show, including the favorites - "Never Never Land," "I Won't Grow Up" and "I'm Flying." Jerry Brabec serves as musical director, leading a live 10-piece orchestra that includes instruments ranging from trumpets to oboes to a harp.

Choreographer Sue Gillespie Booton gives energy and movement to the musical numbers, especially with the "Pounce" dancers -- Neverland natives who greet the new arrivals to the island. I have to saw that the "Pounce" dancers were our favorite part of the whole musical! 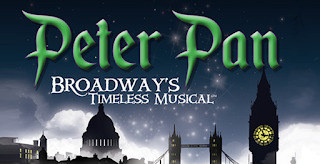 Is best for ages 4 and up. I do have to say that Isaak was the most engaged. He just turned 9.

It ends up being 2-1/2 hours long with intermission. During intermission they serve cookies and drinks. They are unlike other venues, and do not have high priced food and drink.

Remember to stay young at heart!

I received tickets from The Rose Theater to see Peter Pan. I only recommend products or services I use personally and believe will be good for my readers.
Posted by An Apel a Day at 1:55 PM

Peter Pan is Mariah's favorite, but there have never been any live showings in our area. I wish they would because it would be nice to see it together as a family.

How awesome that you got to take the boys to see Peter Pan! My husband and I got to see Peter Pan at the Fox Theatre when we were dating. We thought we were going for a Coke Movie night ($7/person) and ended up getting our dates wrong. I guess we looked so disappointed when we got to the front of the ticket line that someone else in the line pulled us aside and offered us free tickets that were supposed to be for a co-worker that couldn't go. We were thrilled!

Does the Rose Theatre only show children's performances or they a typical Broadway and performance art theatre?

@ Mandy 'n' Justin it's really only a children's theater. Although last Christmas - A Christmas Story really engaged us all! This one only the boys got super into it.

My kids will love this! I haven't watched Broadway for quite sometimes!

We have a Theater in my hometown.
I told my parents that it would be great to see them do shows catered to children to hopefully bring an interest to people to support it.
It is falling apart is just looks so sad.
(I took acting classes there for 3 summers!)