My nephew Emerson has been having seizures. While it's fairly common for children with Trisomy 13 and 18 to have them the medicine he was on didn't seem to help them. He was on the highest dose. If the switched his brand of med then a side effect happens - it would lower his bone density. His bones are already not very strong. I don't think medical marijuana is legal yet in Nebraska.

They haven't figured out what to do.

I watched a few. He basically pauses for a bit. Then gets really happy when it's over. I would think a seizure would make someone completely wore out. I was so clueless about seizures I had to go look up information on them.

On Monday he got a EEG. It was so bad they admitted him into the hospital right away.

Evan, his oldest brother is in 7th grade, but they still don't like the idea of their kids being left home alone after dark. My oldest sister Angie went over there last night, and I'm going over tonight. My parents helped get their youngest Edison to and from preschool.

I do hope they come up with a plan for Emerson. It sucks having him in the hospital. He can pick up other illnesses there, he misses his brothers, and the rest of the family pitches in a lot.


Emerson and Edison on a Go-cart at the Pumpkin Patch: 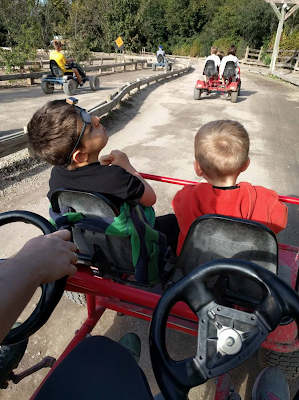 We have a car in the shop from the hail damage. We only have a rental car for 3 days. That car they may total out. You know that saying, "When it rains, it pours."? I'm beginning to think it's never going to stop pouring.

I hope Emerson will get better soon, Alissa. It is important to ensure that he is in good hands.

ANd boy we had big rains the last 2 days here, and now it almost 85 degree F again :(. The humidity is worst than Indonesia..

Poor guy can never seem to catch a break. I just don't understand why they won't legalize medical marijuana, especially for cases like his. It's legal in Michigan and I have seriously considered moving up there just so I can get it and stop taking these darn biologics. Positive thoughts coming out to all of you. I hope it stops pouring for you guys soon.

Awww little sweetie. I'm sorry to hear he's in the hospital. I'm sorry about your car too. Hurrah for people who pitch in!

You know, sometimes I get mad about some little thing or other, and sulk. But when I think about what the whole extended family has to deal with in that situation, I realize I have nothing to whine about.

He's lucky he's loved and that he has an extended family that care about him. Too many of the little one's out there don't have any of that going for them.

My parents took me to the Washington Zoo when I was about your boy's age, and I still remember it all these decades later. It was one of the things I won't forget.

I am playing catch up on your blog... skipping here and there...
hope E is better now...i hate I did not know about it when you posted...