We got a chance to visit The Rose Theater this last Friday. What did we see? Goosebumps The Musical - The Phantom of the Auditorium. 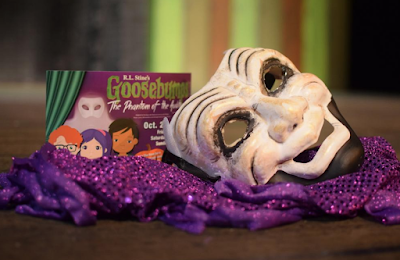 Best friends Brooke and Zeke are excited to tackle the next big Drama Club production. We had a bit of a giggle because Zeke is Isaak's nickname - except I've always spelled it Zeek.

But what’s up with that spooky script the theater director has chosen?

And that creepy trap door that leads to tunnels below the stage?

And the strange voices in the theater?

Will the show go on?

Those are all questions that are thought throughout the show.

It's 75 minutes, with an intermission in between.

We went on Opening Night. They had kids in costumes go up on the stage. Then there was some trick or treating afterwards. My kids are a little old for those things, but they enjoyed watching the kids up on stage. We did wear costumes, for fun. I love how The Rose always goes the extra mile to make sure kids have a great time! 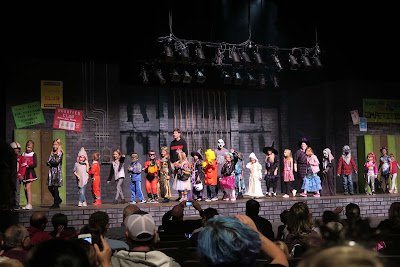 The show was for all ages. I do think the ages of 6 to 9 is probably best. That's more the ages of kids that would read the stories. Some little kids may not have followed the storyline. I don't think it was too scary for any children though.

The stage stayed the same, with a few minor changes throughout. They did have a strobe light, for the elevator going down, and to emphasis scary scenes. 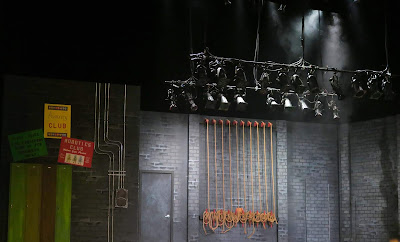 We did enjoy getting out of the house to see a semi spooky musical. The boys did like that they have read some of the books. That brought back memories. I think they wished it was spookier. They had to not make it too scary for smaller kids.

The actors did a great job! We loved their voices! 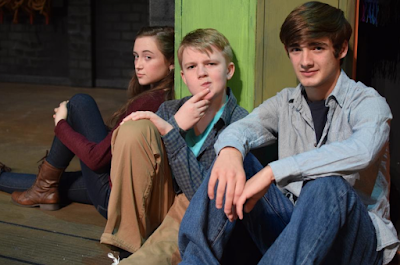 It had a spooky vibe, comedy, and mystery. 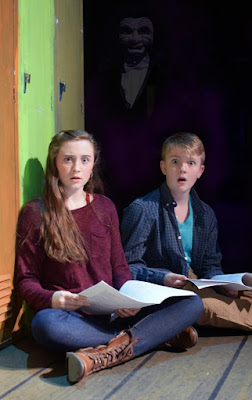 Goosebumps: The Phantom of the Auditorium – The Musical is sponsored by Children’s Hospital & Medical Center, Nebraska Furniture Mart, Security National Bank, the Nebraska Arts Council, and the Nebraska Cultural Endowment.

Have you read any of the Goosebumps books?

Disclaimer: We got free tickets to see Goosebumps the Musical. The Rose Theater in no way told me what to write, or influenced my decision on what to say.
Posted by An Apel a Day at 11:58 AM

I think the books and movies are cute. I bet we'd enjoy the live show. Your Rose Theater sounds really lovely for all the shows they put on for the community!

How fun!!!!
We have been reading this book lately, love it!