Travis has 2 bosses. It's a husband | wife team. Much like my work. His male boss has a brother that was in a play showing this past weekend. His female boss got a little annoyed that we were busy Friday, and couldn't go with them. We had tickets to The Rose Theater already that night + decided it was best we go on Saturday night; after we dropped the boys off at their leadership camp. Their camp was in the same neighborhood as the play. The play wasn't for kids anyhow.

We went by ourselves to a play called The Vultures.

As soon as we got there I had an inside giggle. The lady at the desk said, "Oh you're already paid for, but wait let me get you a ticket. You'll want that for your scrapbook." If you count this blog as a scrapbook, here's the ticket... 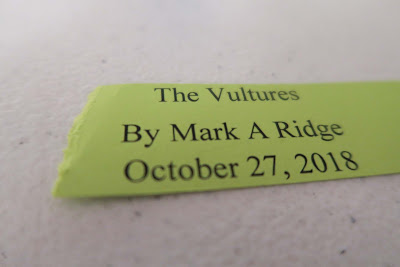 They handed up a Playbill, and off we were to sit down. Then a lady came to ask us if we wanted to buy raffle tickets. I didn't know how that worked, or what the raffle was for. It ended up you buy say $6 worth of tickets. Those duplicate tickets go into a pot, and whoever wins, wins half the money. The other half went to the Florence Community Theater. I didn't win. 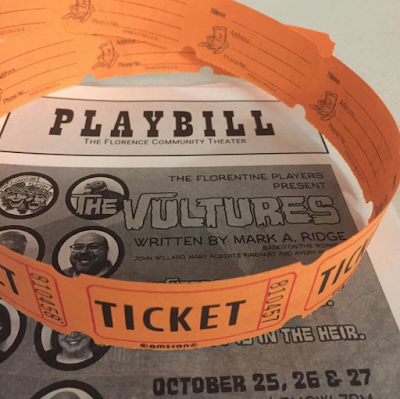 There was candy all over the table. Of course we showed up early. I told Travis that I felt guilty, for eating it. Then I started eating it, and stashing the wrappers in my pocket. I left no evidence behind.

I told Travis that eating all the candy like that could be in an episode of Mr. Bean or Curb Your Enthusiasm.

Another person would sit down wondering where all their candy is at, and complain to the staff. All the sudden an old lady worker would come by and asked where all the candy was at? I'd play dumb. All the wrappers would be in my pocket. She'd ask us to empty our pockets. Wrappers beyond wrappers came out of my pocket. They got pissed at us! We got in free already. They made note of that. Then they kicked us out.

I didn't really eat that many. It was just fun to blow it up in my mind.

We were both laughing about it. 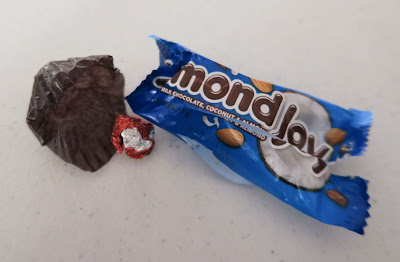 They place was filled with older people. It made us feel young. Ha! Really I'm 42 and Travis is 43.

The play ended up being really good! It was a mystery and comedy. It sort of reminded me of Clue the movie. We laughed many times over again!

The story takes place at Westmount Estate, on the 20th anniversary of the death of publishing magnate Simon West. As his six remaining relatives gather for the reading of his will, the mysterious housekeeper declares, “The relatives are swooping in like a wake of vultures ready to pick the carcass clean.”

When the will is read, Hunter West is named as the sole heir, on the condition that he doesn’t suffer from an insanity curse that has plagued the family. If Hunter is declared of unsound mind, a second envelope of the will must be opened, and it will designate an alternate heir.

As the night progresses and the storm rages, Hunter’s sanity comes into question and one of the group goes missing.

Who will ultimately inherit the fortune? Will it be the charming realtor, the handsome male model, the dimwitted nail technician, the bitter old woman, the gay hairdresser, or the mild mannered accountant?

Throw in a priceless pocket watch, an androgynous housekeeper, an escaped mental patient, and a pair of reunited lovers and the result is murder, with a hefty dose of laughs.

It's a great thing we went! Travis' boss texted the very next day to ask if we had any problems with the free tickets, and to ask if we liked it. We had no problems, and enjoyed our time!

Do you like going to plays, musicals, and other live performances?

Disclaimer: I didn't have to review The Vultures. It was good, so I thought I'd share about our experience.

I love going to live shows. It's even better when the tickets are free. Jason's boss gave us a few of his because he lives in Florida but had season tickets here. We got to go to STOMP! and A Chorus Line for free and it was wonderful.

I would have eaten all the candy too :)

Would love to go to a show again, maybe one day. I just got a new job, so back to working on a new schedule ;)