This year I was at a loss as to what I wanted to be. I could have been a witch, I thought about trying to be Salvador Dali (he's an artist for people that are not art fans), and I thought about being a McDonald's worker (I have much of the stuff from a review).

Then I decided I wanted to be a cactus.

One day I poked big toothpicks in a green sweater that I've had for a long time. On the backsides I hot glued buttons. Then trimmed them with a fingernail trimmer. By the end of that day I was done! I did great not hot gluing my fingers the first 1/2, but toward the second 1/2 I burnt them often. I don't even think I was careless. It's just that I had the task of getting them in the sleeves, which was tight quarters. 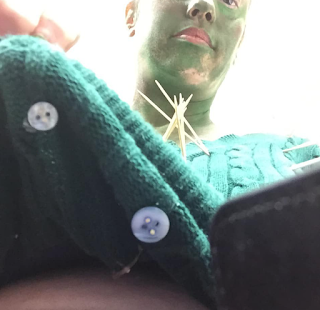 Then I had to get fabric to make blooms, for my cactus.

I ordered a terra cotta skirt, which I was excited about. It  came in the mail, and was golden rod yellow. I bought dye, and dyed it too dark.

It ended up being more work than I'd like, but at least I got to watch Man in the High Castle, while I put the toothpicks in.

This is how it turned out: 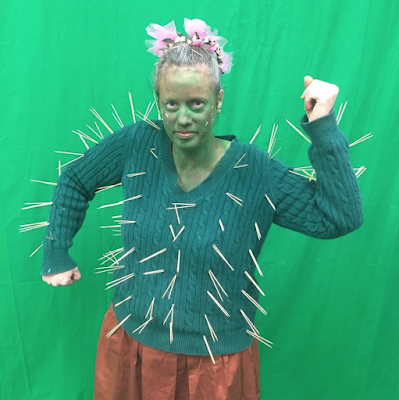 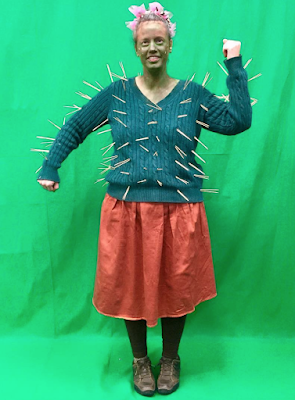 Two students were cacti, so we grouped up together to get a few shots: 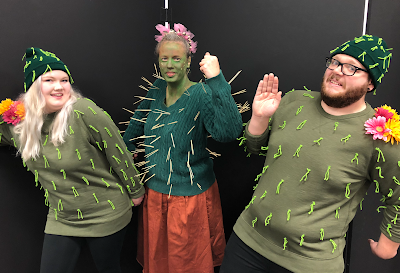 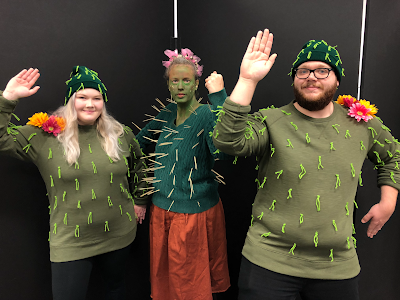 A detail you didn't see! My nails: 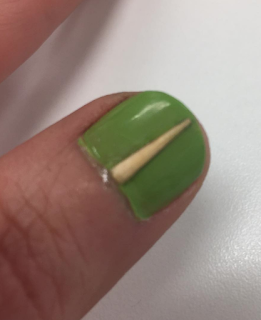 I hardly do my nails! I just use my hands too much.

Lucky for me I didn't get poked too much. It was impossible to lean back in a chair though. The first green makeup wouldn't cover me, and the second was almost too strong. I'm not the best with makeup! I rarely wear any daily, let alone Halloween.

I get to go home, wash my face, and dress Isaak up to be the girl he wanted to be. Travis said, "I just don't know how to get him ready!" Ha! 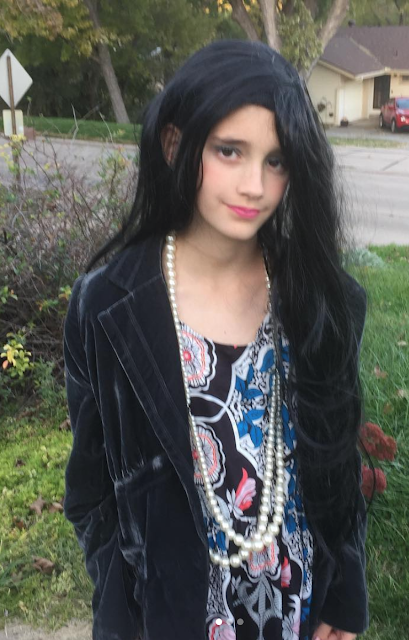 Mica's now too old for Trick or Treating. We'll hang back to deliver candy.

What's your favorite costume that you or your child has been?

What's your favorite candy?
Posted by An Apel a Day at 5:00 PM

I love it! I love Isaak's too! Allison was Coraline this year, but everyone asked if she was the Morton Salt Girl or Georgie from IT. She'll be 15 next month and says you're never too old for Trick or Treat. Mariah actually went last year with some of her college friends. They just borrowed lab coats from their science dept. and went as scientists lol. My kids don't know when to let go, but that's okay.

The cacti is a fun idea. Did your students plan it with you or was it coincidence? I think my son's Halo costume last year was my fave. He's never played the game, but the costume was really cool! My granddaughter was a little turkey one year, that was cute. :)

Now you know your son would have made a lovely girl, hahahaha :)

My student didn't know I was going to be a cactus, and I didn't know they were going at cacti until the day before. They are a couple. Ha!

You did a fantastic job with your costume!