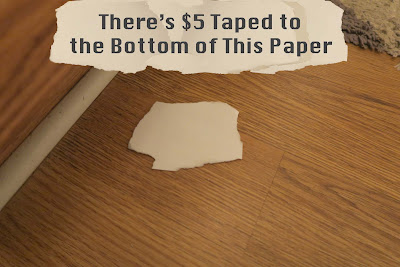 This may just look like a torn up piece of paper. It is. What you don't see is that there is a $5 bill taped to the bottom of it.

I put it there to see how long it would take one of my family members to pick it up.

My guess was that Isaak the 10 year old would pick it up first.

Day 1, 2, 3 and 4 went by. The paper still existed. I even moved it out away from the sink. I was beginning to think no one would pick it up.

I kept the trash empty, so that no one would throw it out on accident.

Right as I was about to go to bed Travis said, "What is the fu@* is this?" He got out of the shower, and it stuck to his foot. He didn't even see it. Someone on facebook said, "It doesn't count if he didn't see it to pick it up." Well perhaps, but it was found at that time.

When I told Isaak the next day he was so annoyed. He's like, "I saw that paper, and should have picked it up! I knew you were sweeping, so I left it be."

Mica's always in his own world, so I wouldn't think he'd pick it up.

The idea wasn't totally an original one. I did find it online. I figured why not give it a go? It was fun.

LOL that was fun I was laughing reading it it took longer than you thought it would by the sound of it LOL :-)

My family would totally fail at this. Jason's idea of cleaning the counters is sweeping the mess onto the floor. Mariah figures if she didn't make the mess, it's not her responsibility. And Allison is the biggest asshole who makes a tornado sized mess and leaves it for me to clean up. None of them would get the $5. And they wonder why I am always griping when the house is a mess.

@Theresa Mica's into himself to the highest extent. He would never get it. Isaak makes messes like Allison, but does pay attention and will clean at times. He was my pick for getting it. He would have. Travis wouldn't have gotten it had he not stepped on it.

Ha! My family would fail at this too. Hubby and the boys think any mess on the floor is my job to clean up. Grrrrrrr!

Well, I know one thing... my girls would've found this before my boys would've that's for sure! Great idea though.... hmmmm I think I'll pass this on to my girls for sure!!! They've got some kids that could use the lesson & get a kick out of it! hahaha! Have a great day!

Ha! It would never get picked up in this house!

That is so funny. Wow. That piece of paper would be picked up in a nano second. Thanks for hosting and I hope that you have a wonderful week.

Yep, I've seen this on Facebook. I am thinking of doing it. Knowing my family, no one will get the money. But they might surprise me.

Sadly this would be my house.. but I think Savannah would pick it up before Broxton...
UGH