Mica's birthday party was postponed last week due to sickness in the fam. I suppose it could have been again tonight.

Aunt Terra's whole family got it! Emerson now has a fever! He's also pulled out his feeding tube twice lately! That is why he most of the time wears baby gloves. Luckily Terra got it back in both times on the first try! YAY Terra! I didn't think she could do that! I know she's a nurse, but for adults not babies. Grandma Spiehs said that babies are easier because they don't fight ya. I think they'd be harder because their systems are so small! 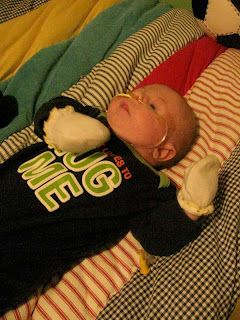 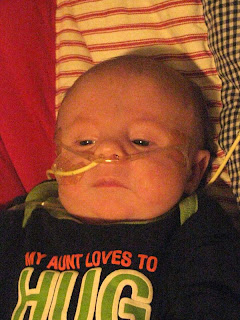 Emerson is 8 weeks old now. He close to 11 pounds. We've stopped having 1 week birthday parties now that school has started.

Mica's birthday was on the 10th, Daddy's is on the 30th and Terra's is on the 4th of September. We celebrated them all.

Of course since Mica's the youngest, he was the star. He had a button down shirt and tie sitting out on his table to change into since today was spirit day at school. His idea, not mine. Then he got red frosting on his shirt. It came out! WOO HOO! 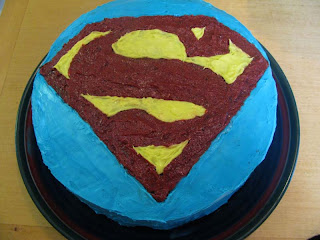 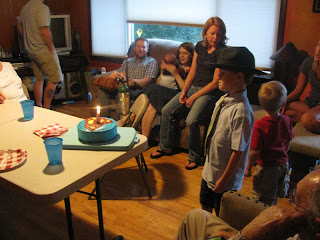 The cake story can be found here.


His first gift was inside a box of burritos. He pushed it aside and didn't even bother opening it until we told him burritos were not really inside the box! 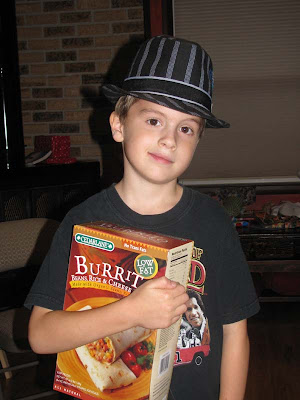 He couldn't wait to put his Lego gifts together that Grandma and Grandpa Spiehs got him! We made him wait until tomorrow. It was after bedtime, and his first week of kindergarten. Sleepy boy!
This isn't the best photo! But I think it illustrates how much Mica loves button down "handsome" shirts! He got one from Aunt Angela and one from Aunt Terra and zip ties from Aunt Terra. Aunt Terra didn't actually pick them out, Uncle Tyson did good! 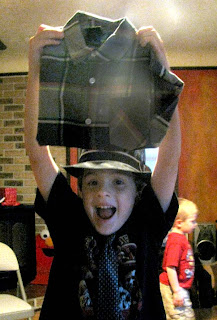 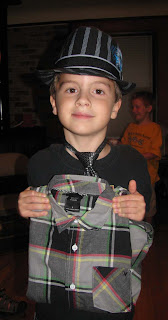 He also got a few Cars 2 cars from Aunt Angela.

We got Terra these reusable homemade veggie/fruit bags from Miss Malaprop. I was impressed with how quickly they shipped and how much I got for the money! They sent a cute free shopping bag to! We also gave her a book I won off of My Baby's Green! Both sites I love! 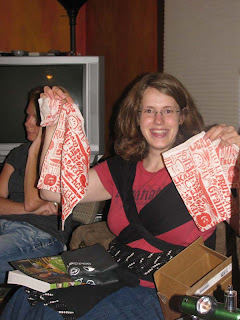 Daddy will get his gifts on the 30th, when it's actually his birthday.
Posted by An Apel a Day at 11:05 PM

aww.....birthday parties must be fun....i never had birthday parties :) as a child, it wasn't the trend in the family....but i celebrated some times in college and now, i go on dinners or meet friends....

Looks like the clothes were his favorite part! I think you have a fashionist in your family! :)

He is getting big, I hope he is doing well. I think of you all every day. Happy birthday to everyone!