Mica's had a crush on a girl in his class since the beginning of the year. I haven't heard of any girlfriend talk for awhile - except for fictional characters. I think through his teacher and us made it clear to Mica that he needs to just be friends with people right now.

That doesn't change the fact that he likes this girl in his class! He actually told me last week, "Mom I know who I want to marry!" I said, "Who?" He said, "Insert her name here. But I know she's just a friend right now." I said, "Mica you might just change your mind."

We went to his music and art festival. A couple of his friends were there. He had to sit next to the girl he likes. We went over to look at his artwork. The kids in the class could choose anyone to draw as their friend. Mica chose the girl he likes. 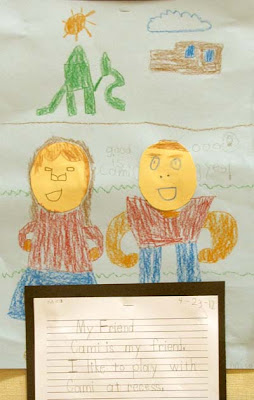 There is a boy who has liked my daughter since Pre-K 4. He still loves her in the 4th grade. Sweet but I have my eyes on him!