Trick or Treat Smell Their Feet

I've posted their costumes on here before. There was the Y Superhero Party and they just randomly wanted to wear their costumes every so often. I bought them last year after Halloween. I should do that again, but I've probably missed the after Halloween specials by now. I've just been too busy.

Here they are on the night of Halloween: 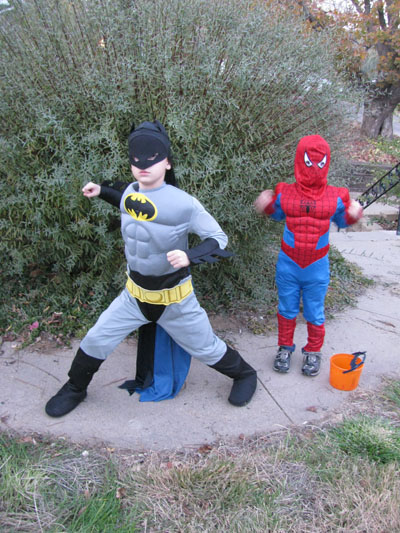 Some of my other nephew's were Batman as well. Emerson wore his Batman costume into surgery on Halloween. Terra had an outfit underneath that said, "Is this a trick or a treat?" Very fitting. He got a bigger G Tube to make feeding him easier, a pick line port to put his chemo in. He got his first chemo drugs. He was cranky and has been throwing up. Let's hope he does well. Halloween wasn't so enjoyable for them. Their Daddy took their big boys, both as Batman out Trick or Treating.

Mica and Isaak had fun. A few neighbors handed them over full sized sodas, or pops (whatever you call it) and full sized candy bars. CRAZY! Isaak was scared of any scary house. Mica claims he doesn't get scared of anything.

Both boys enjoyed splitting up their candy so much. In fact Isaak asked to, "Play that game again." What he wanted to do was to split up his candy again. Daddy and I were both like, "It's already split up Isaak." Isaak didn't want to eat candy because it would be out of his stash. He's a hoarder. LOL Mica on the other hand is always hungry for ANYTHING! He asks for candy morning, day and night.

BTW I'm not looking forward to Daylight Savings Time. It sucks! I hate Daylight savings time! The boys have been needing to go to bed early. Isaak won't nap lately. No nap = PUNK ATTITUDE! When I'm fed up, I'm fed up. Off to bed you go!
Posted by An Apel a Day at 11:26 PM

Ugh - I am totally dreading daylight savings, too. It messes up the kids schedule EVERY. SINGLE. TIME.

Your boys are so cute by the way. I bet you felt safe having Spiderman and Batman there to protect you!

I don't like it when the clocks change back either. Gets dark so early.

I like buying the costumes on clearance too. I do a lot of clearance shopping.

It's funny that they're so different, isn't it? I have four and they're all completely different too. It's neat.

They look cool in their Super Hero costumes. :)