Last year Mica kept tearing old paint off of sign poles when we were in Chicago. Daddy told him that he was going to tell the Chicago mayor. Mica could care less. Things like that do not phase him.

Isaak has been pulling leaves off of trees. Yesterday he pulled green berries off of something and lied about having them in his hands. We've told him not to do it. Tonight we caught him red handed yanking leaves off of trees downtown. Daddy told Isaak sternly that he is going to have to call the mayor and tell her if he does it again. 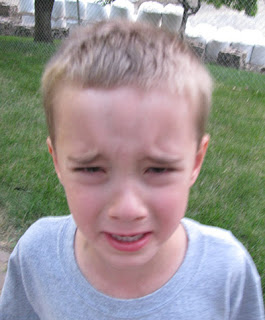 He looked like a pug dog to me. Ok so his wrinkles droop the opposite direction. Isaak's eyes squint more in this photo, but they are usually as wide as a pug dog.

He was pretty worked up that Daddy was going to call the mayor on him!


Naturally I had to catch this moment on video. I'm still laughing about it! We assured him that we were not going to call the mayor, and that he really just needs to stop picking leaves off trees, flowers off the ground, and berries off bushes.

That's pretty funny - it cracks me up how much alike our youngest's are.

Lol...and the mayor's republican...she would take him behind closed doors and not let him talk!!!

awww, Bless his little heart. Isn't he just so precious! He was so worried. He may have learned not to pick anymore...haha

That's hilarious! We used to "call" the police on my oldest daughter. She would freak out until we cancelled the call lol. I actually pulled a police officer aside and made him have a chat with her about her lying and back talk, so those calls always worked.

We've been involved with child services for 5 years here because of my niece still being in the system, and I am good friends with one of the caseworkers. When Allison throws a temper tantrum and screams that she hates her life, I tell her I'll just give Renaldo a call to find her a new family then. Shuts her up pretty quick lol.

that is too funny! ha ha ha

Hahahahah.... That is so funny. Maybe that will stop him pulling leaves off the bushes.