This weekend we had some cousin time. Two of my nephews that are the same ages as my boys stayed the night.

I first took them to Arby's. I had a coupon for 3 roast beef sandwiches for $5. Forget the kid's meals, the 8 year olds ate one adult sandwich by themselves. The 5 year olds split one. They got 1 small fry to split for each age group. No scraps were left. 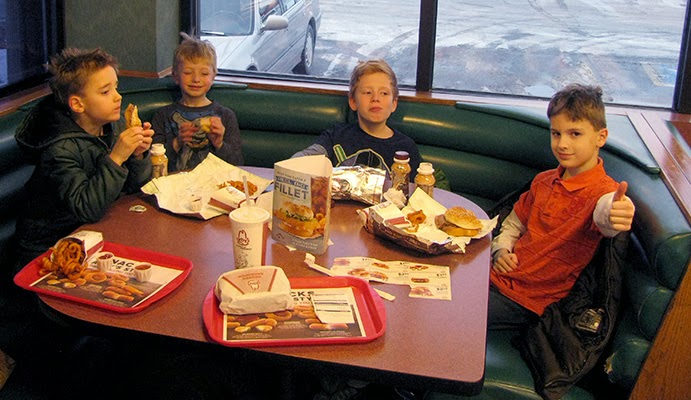 The little blond, 5 year old Elijah kept on talking at night when it was bed time. It's the most I've heard him talk ever. He wouldn't talk to me when he was up and moving. I threatened to call him something that he doesn't go by "Eli" if he wouldn't respond, and then he started answering me.

They attempted to go sledding at 7 in the morning. The older boys were on top of that. They got ready in a hurry. The younger boys were too busy playing with a marble track. As soon as the big boys were out the door, the little boys were in the scramble to get their stuff on to go sledding to. The idea was to keep them busy, while I was made breakfast. It didn't work to well. They were back in the house in 15 minutes.

Daddy made a pirate ship out of our new toilet box, other random boxes, and pillow cases. That kept them busy, while I made breakfast.


Nephew Evan on the lookout. 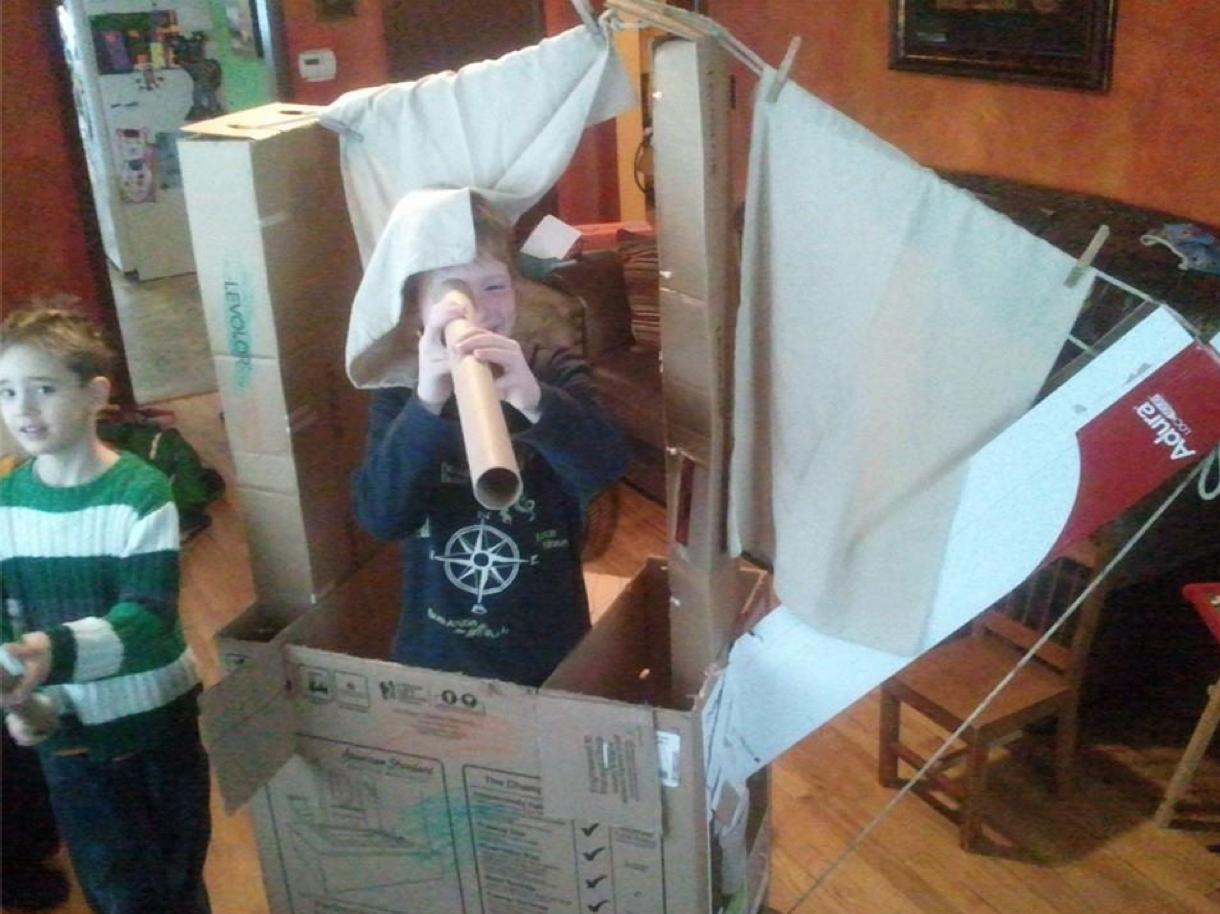 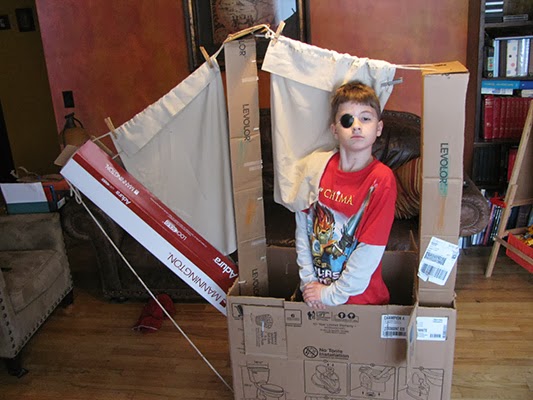 My favorite because he looks so little in the ship. I just love it because he was the most into it. It was his idea to have a pirate patch. Isaak being a cute pirate. 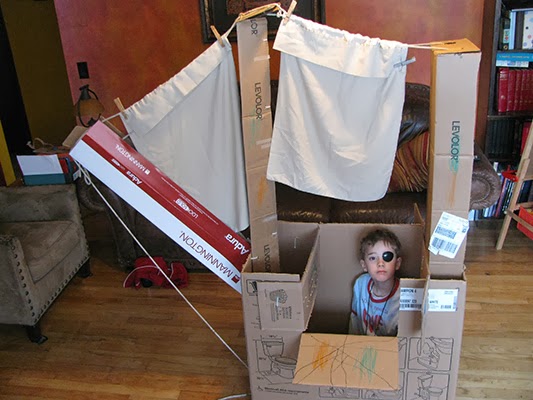 Do you ever make things out of boxes? If you want to see more box inventions check out the boy's box apparent here, the boy's box seats here, and my favorite, the boy's coolest box spaceship here. The toy store Fat Brain Toys has a section on their site to post box inventions. If you are interested here is where you can go to see what crazy things people have made out of cardboard boxes.

If you have a moment please enter Organicasaurus snack Giveaway and GungHo Natural Energy Boost Giveaway.

That pirate ship is terrific I hope they don't get seasick and where's the parrot? LOL

That is wicked cool!! My boys would have a BLAST with that.

That looks like a lot of fun. Good for blood relations to spend time together, so it means something. I always felt badly that my kids grew up here and their cousins are all on the West Coast.

wow the pirate ship is a fantastic idea! :)

I love boys! I raised 4 plus their friends. They rock! Yours are precious!

You think they eat a lot now . . . just wait! I love your pirate ship.

Man, talk about creativity! Super! I love your sons. They have great character. Keep it that way, k? k. lol

That is such a creative use of boxes! I LOVE your Pirate Ship!!!

My 5 year-old daughter would have loved to play in a pirate ship box with the boys! She loves imagination play and she enjoys boy's games as much as girl's. But, I must say, it looks like you and your hubby have your hands full! :)

oh wow they all look like they had an amazing time :)

Hari Om
I love this because it shows that kids still live to play other than in the "ether"... these are the things that build memories. YAM xx

What a fantastic pirate ship. It gives me all sorts of ideas. I am a Pippin leader, they are 5-6 year old girls. They would love to build a ship.

Funny pictures , yes, I like to see those guys having a good time , nice shots !

On the Itinerary said...

Looks like they had a lot of fun! Enjoy your Wednesday!

That is a super cool pirate box!

That is a good deal for Arby's. Kids always remember those kinds of outings.

How inventive, and they really look the part too!

Ya know, Alissa. I haven't ever done Photo Shop. I'm too cheap. I do use Pic Monkey and Photobucket in a combination method. I have anyway since Google through a wrench into the works about last September. More on that ...later. lol

I guess growing boys sure can eat. That Pirate Ship looks like the kids had a lot of fun in it.

Look at those boys! sooo cuteee...and very cretive as well! Pirate Ship in the middle of the house? why nooot...

We never do kids meals either. I'll get a large fry and split it, plus cheeseburgers and waters Much more economical. That pirate ship is awesome!