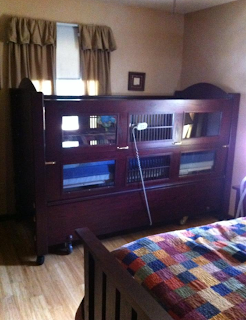 I'm sure some of you have never seen a bed for a special needs child before. It's made to keep him safe.
Posted by An Apel a Day at 12:43 PM

Hello Alissa. Working at a college, we sometimes have student look-a-likes as well. And you're right, just call people what they want to be called. It's not complicated :)

I don't get enough sun in my yard to grow things. It's one of the things I really dislike about our yard. Glad yours did good though!

It is funny because I always wanted a son named Nathaniel, but I wanted to call him Nathan. His dad said to me, why not just name him Nathan then - which made perfect sense to me, so that is what we did lol.

I have never seen a special needs bed...Thanks for sharing that :)
As for names... I go by my middle name... (first name is a family name) but--- my brother goes by his first name. no clue as to moms reasoning on that one...

It always takes me a bit to learn all the students' names.

I hope he loves his new bed!

My garden did great too. My basil is so huge that I just can't use it all.