Great Aunt Becky does this thing where she gets a gigantic box, and puts little toys in it. She ties a ribbon around those toys, and attaches the kid's names on the ribbons. Then she asks the kids a Christmas type question. If the get the question right they get to pull a gift.

My kids don't go to church (please don't judge). We help them if they don't know an answer. 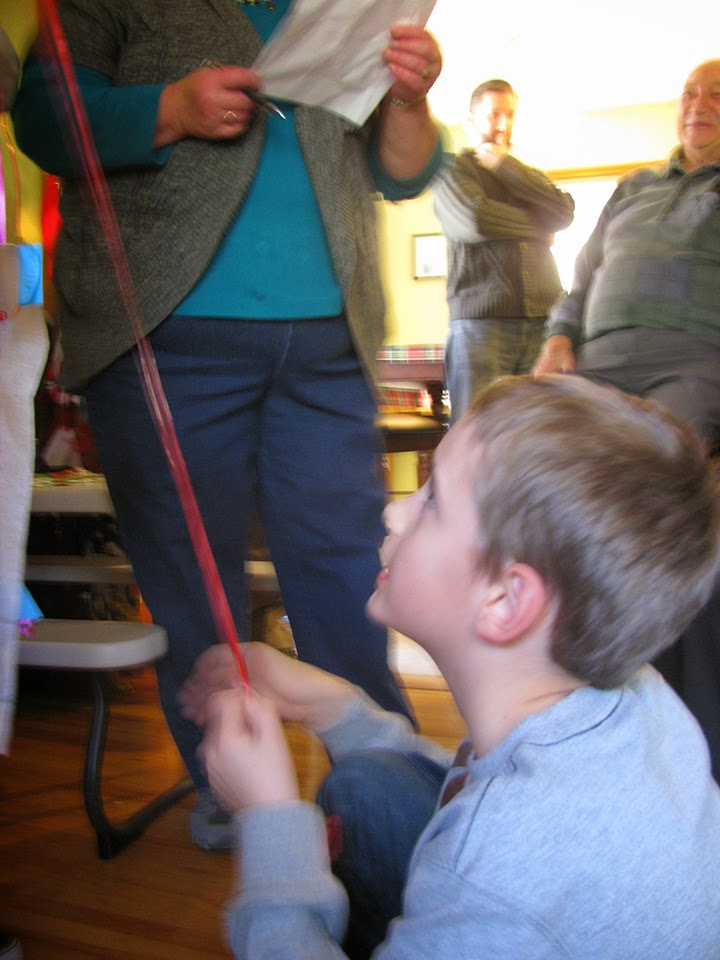 It's hard to get good photos because they are in constant movement. 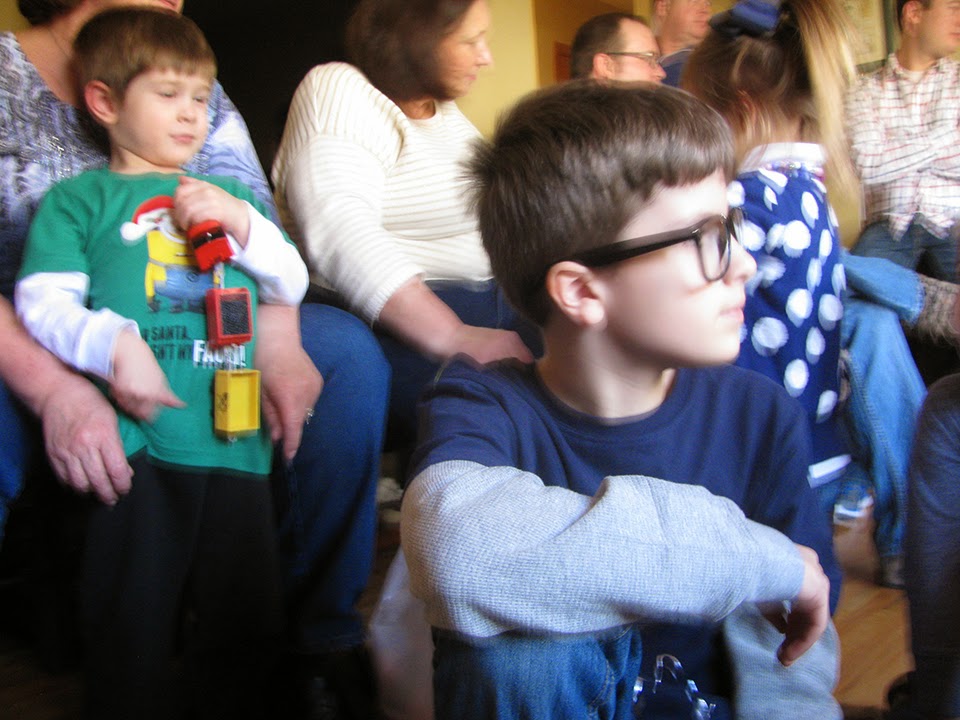 The boys liked their Jacob's Ladders the most. All was good. No kids were in trouble. No one was stressed that I knew of. Everyone was having a pretty good time.

Then things started unraveling in my mind.

I was in the kitchen sitting in the back corner. One person (I won't say who) started saying how I never help. Ummm...excuse me. She was right I didn't help at that moment. I was stuck in the corner with two older people blocking me in. I don't help in the kitchen at events like that because I'm always in the way. I do help bring in dishes, taking the trash out, dumping 1/2 drank drinks...and you get the picture.

The meal was over. People moved, so I could get out. I gathered peoples empty dishes to throw out, and took the trash out. I bet no one noticed that.

Then I got my cheese ball, crackers, and cookie plate out. Goodies were already out on the table to be devoured.

The same unnamed girl said to me, "Don't put that stuff out. It's not time yet. We just ate."

I put it out anyway. My aunt said, "It's ok just set it here. Other stuff is out."

The unnamed person said, "Don't put that out Alissa!"

I stormed out of there. I vowed to not put anything out the rest of the day. Seriously it was Christmas!

Somehow, my stuff got out later... I didn't put it there.

I could use a few choice words! Why waist them on Christmas!

Grandpa left the event because he left his meds. That's not the whole reason why he left. We bitched together later.

Isaak got so busy playing. He said his parts hurt. Later on I realized that his freaking pants were wet with pee. What 1st grader pees his pants because he's too busy playing?

I told Mica, "If you don't want those glasses on give them to me. Don't set them down somewhere to get broken." Well he broke them in 1 day.

On the way home I was complaining venting to my husband.

What does he say? "Get over it." Those words are possibly the worst words you can say to someone that's annoyed, mad, and hurt. This is coming from someone that's been complaining about work to me for the last month. I needed time to pout "Get over it." I was quiet the whole rest of the night. When my husband asked me what was wrong I said, "Nothing." I was getting over it. It drove him nuts that I was quiet. In the morning he asked me again. I tried the, "Nothing" thing, and that only worked once. I came clean. He said, "Well I learned that from you." I don't tell him to, "Get over it!" when he's mad. I actually agree with him that this person, or that person is a pain in the ass, and then say, "I don't think they're going to change. You can choose to be around them, or remove them from your life."

So folks that's how Christmas ended.

Do you ever get stressed during the holiday season? They say it's one of the most stressful times of the year.
Posted by An Apel a Day at 5:42 PM