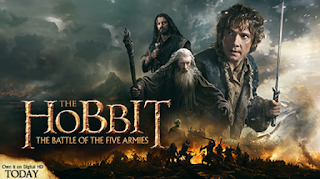 I would wield Tauriel’s Bow and Arrow! Thank you!

Can you believe I haven't seen these movies yet? I really need to!


You wield Tauriel’s Bow and Arrow!

You are insightful and compassionate like Tauriel – you have remarkable reflexes and reach for the bow and arrow when headed into battle!

did it three times and got the same thing - You wield Tauriel’s Bow and Arrow! - regnod(at)yahoo(d0t)com

Love my answer, I wield Tauriel's Bow and Arrow *

Apparently, I would wield Bilbo's "Sting."

I got the Bow and Arrow.

It said I: YOU WIELD THORIN’S ORCHRIST!
YOU ARE PRECISE AND CLEVER LIKE THORIN – CRAFTED BY THE ELVES, YOU REACH FOR THE ELEGANT DOUBLE-BLADED ORCRIST TO DEFEND YOUR HONOR. ORCRIST MEANS “GOBLIN CLEAVER” AND IS KNOWN BY THE ORCS AS “BITER.”

Is this giveaway for the chance to win a physical copy of the Blu-ray or is it for a digital download of the movie? Reason I ask is that you state in the giveaway post it's to win the Blu-ray/DVD, but down in the disclaimer it states otherwise. If you can clarify this that would be great, Thanks! :)

Tauriel's Bow and Arrow! Thanks!

You wield Thorin’s Orchrist!
You are precise and clever like Thorin – crafted by the elves, you reach for the elegant double-bladed Orcrist to defend your honor. Orcrist means “goblin cleaver” and is known by the Orcs as “Biter.”

You wield Tauriel’s Bow and Arrow!