It's been awhile, since I've blogged about us.

Both boys have gotten a haircut. Mica got a lot off. I thought it would feel much better before their outdoor camp. Isaak we didn't get his cut until after it though. Isaak wouldn't let me take pictures. He's in a non picture taking phase.

Travis cut Isaak's hair. It stayed the same length on the top, and shorter on the sides and back.

Of course Mica's hair looks much better styled, but it hasn't been styled, since the day he got it cut. 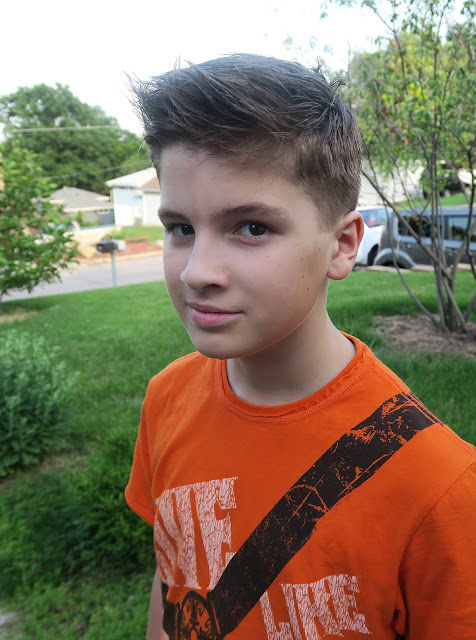 Both boys love their new hairdo's.

Mica in particular has a lot of cowlicks in the front of his hair. His bangs grow in at a major diagonal angle. When it's really short it looks like someone didn't know what they were doing when they cut it. I love that the hairdresser left his front a little longer.

I need a haircut as well, but I can't decide if I want to trim it, or chop it. I know it's just hair, it will got back, but my hair is slow to grow. I have to say that it looks better short, but I love being able to put it up. Decisions!

His hair looks great! I also like the longer on top, shorter on back look :)

i love it. he looks so different :)

Travis is doing a great job indeed! Love the hair..