Drama on Our Street

Towards the end of last week I said, "Mica go outside to play catch with Isaak!" The 2 Apel boys were outside throwing a football around.

I was busy making dinner. I felt the vibration of a helicopter. It was so low to the ground, circling our house! My first thought was, Damn it's going to crash! My second thought was, What is going down?!

Travis rushed out there, saw the look on the neighbor's face, and told the boys, "Get in the house! Lay on the ground!"

Soon after about 4 or 5 cop cars showed up with a state trooper. 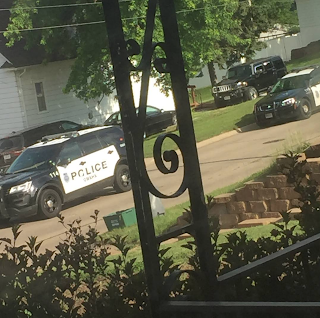 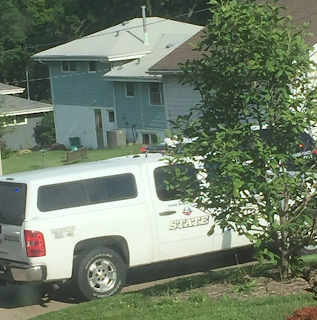 Warning: The pictures are through my windows. I was not about to go outside, unclear of what was going on.

I've heard a few stories, but I'll go with the most believable:

A guy was fleeing from Council Bluffs, Iowa, which is about 30 minutes away. He robbed a car. He decided it would be a great idea to go 50, in a 25 speed limit zone. He crashed into a car. 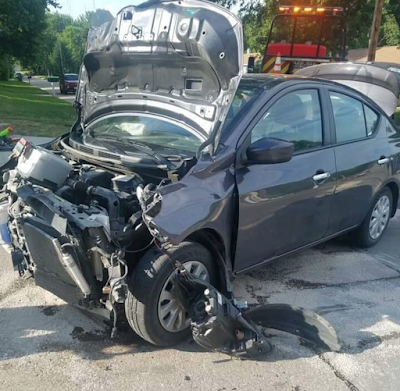 Then took off on foot. Thankfully the other family he hit is ok. Their car isn't ok, but they just have bumps and bruises.

He decided a great place to hide was my neighbor's lawn. Yep he was probably hiding in their backyard, while my boys were playing catch. YIKES!

My neighbor saw him, and he tried to jump a fence. It had vines all over it, so he was slipping all over. The fence won. He ran to their front yard to hide by their retaining wall.

That's when the helicopter started circling our yard.

We all stayed inside not knowing exactly what was going on. Once we found out there was just one guy they were looking for, and he was cuffed I took a few photos. 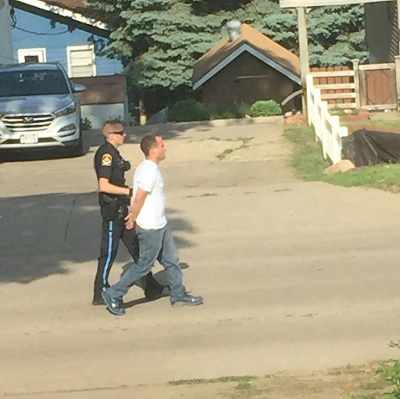 We learned that we need to react earlier. Mica was just outside, staring up into the sky. He would have let a helicopter hit him I think.

Thankfully the guy was unarmed.

What's a crazy situation you've been in?

That kind of reminds me of that meme that goes around on Facebook talking about people in the Midwest be like this when there's a tornado warning, then shows a lady standing outside looking for it. We definitely have slow react times too. Probably because we aren't used to that kind of excitement in our every day lives.

Yikes! Glad everyone was okay! I'm not sure you could have reacted any sooner than you did. I mean you reacted as soon as you knew something was going on, right? Definitely can't live in fear.

Wow, he really banged up that car!
I work for 911 so I hear about that kind of stuff all the time. We don't use helicopters though. Would be kind of cool of we did.