Last night we took over to Aunt Terra and Uncle Tyson's house dinner. We had a little bit of a cool down. I made split pea soup, blue berry muffins and brought over some grapes.

It's been awhile since We've been over there. We try to go on the weekends, but last weekend we were in KC for my cousin's wedding.

Mica played spy's with cousin Evan. They hid in these mattresses they were getting rid of: 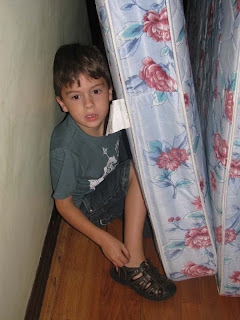 Isaak and cousin Elijah no longer play separate. They play together. A few months makes a BIG difference! I don't have pictures of them this time around.

Emerson is a chunk. We found out some internal things that are wrong with him on Friday. He's both a trooper and a punk! He's supposed to be sucking on a paci to build up his neck muscles. He won't suck on the paci. He pretty much refuses. He only sucks on Terra's finger. Her poor finger hurts because he sucks on it so much. He was given 3 Husker outfits. Gee wiz can you tell we're from Nebraska? I think everyone here is obsessed {except for me. I'd rather be watching foosball.} 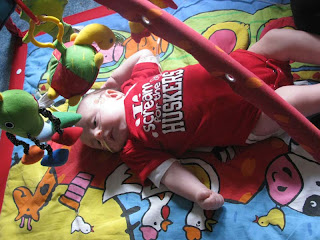 I told Terra she should get Emerson some football BabyLegs. Even I think these are cute and don't get into football!

I need to get those BabyLegs for my son...daddy would be so proud!