We hear Mica utter the words, "I'm bored!" often when he's at home.

Before kindergarten started Mica was pretty good about keeping himself occupied. When he wasn't playing alone, we would play with him.

Now it's like he needs something to do every minute of the day. If there's any down time, he's bored and kind of rude about it. I remember our nephew Evan being like this last year after starting kindergarten. Aunt Terra has mentioned that he developed quite an attitude.

I'm not sure if it's school? Kids might think they are big shots all the sudden for being in school.

It could just be a stage.

Whatever it is, I hope it changes soon!

Today Daddy said, "Why don't you go pick up? While you are picking up you might think of something else to do." Mica hesitated. He stayed in his room for awhile. He built this train track all by himself: 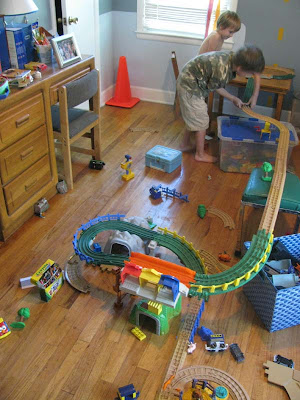