We went to 4 stores in the mall, to look at a Thomas train set display, to eat a Panera Bread Company for lunch, to Kung Fu Panda 2 and then finally to Canfields only to find that they were closed. It wasn't a surprise that they were closed; that's the thing Daddy wanted to do. :(

Shopping wasn't too bad with the boys. They were a little crazy at times, but great overall. I love that Gymboree has a TV! That makes shopping in there a breeze!

I've learned at Panera to only order one kids meal. Their kids meals are big enough for me. I've been bringing cut up veggies; since most restaurants lack in that food group.

Kung Fu Panda 2 was better then Cars 2 in my opinion. It just seemed to naturally fall into place, and didn't seemed to be a forced sequel. The lady in front of us handed over some popcorn. She said she got way too much, and she got refills. We took it in and thanked her. Isaak ate it like it was going out of style. Mica won't touch popcorn. In the movie, the bad character was a peacock, which totally cracked me up. Mica used to be obsessed with peacocks. Kind of odd for a little boy, but he loved them! He got mad when we didn't see peacocks lurking about at the zoo. He also argued when he visited the farm in preschool about the fact that they should have peacocks there. Aunt Terra gave him a few nudges as if to say, "SHUT UP MICA!" :) I even bought Mica a two handed Folkmanis Peacock Puppet he named "Viro."

Isaak fell fast asleep in the car. Unusual! Why can't he do that on trips? Maybe it's the hat that made him drift off into la la land. Of course when we got home he wouldn't nap at all. 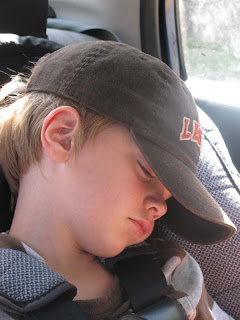 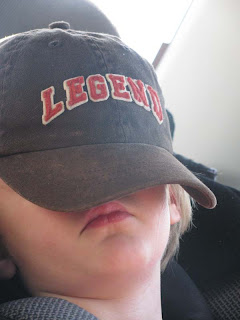 he looks so cute with the cap :)

iam yet to watch cars and kunfu panda sequels...

Poor daddy...sounds like everyone had a great time though!