Faux Camping and a Trip to the Park

Last night I picked up cousins: Elijah and Evan for a sleep over. Daddy, Isaak and Elijah set up the tent for some faux camping: 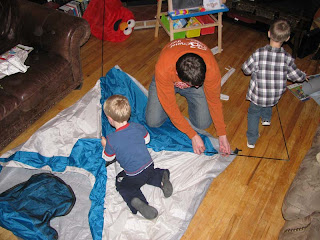 The boy's were giddy. Mica got about 5 timeouts. I really lost track. That boy was tired. I could tell! He was blinking a lot and naughty! Both of his tired traits. Here's a video I captured of them in the tent. I was talking with them about the doughnut shop Aunt Angela and Grandma Spiehs took them to earlier that day. Then Daddy/Uncle asked them if the cops were at the doughnut shop? LOL


Only Mica and Evan ended up sleeping in the tent. I set up Isaak's sleeping bag on a mat in his room for him to sleep on and Elijah slept in Isaak's bed. They all got to sleep somewhere unusual, so it was special. I did not think it would work with all four boys in the living room!

Everyone did great going down except for Elijah. He refused to put a diaper on. I told him that he at least needed to put on plastics over his underwear. That he would do, but said, "These are weird!" over and over again. I said, "Ya they are! They do prevent some pee accidents."  He did cry for his mom and dad. They have a much more time consuming cuddle time at their house; then we do at our house.

In the morning they all sat in/around the tent to watch Poky Little Puppy. 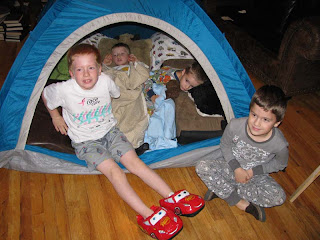 I made Dark Chocolate Chip Banana Whole Wheat Waffles. Daddy made scrambled eggs. Then Evan helped me make fresh cranapple juice. I used 6 apples, 1 cup of cranberries and couple cups of water. It's so good and no sugar added! I also made a hot chocolate that I split for 3 boys. Mica doesn't like it. Strange, he likes chocolate, but not hot chocolate.

Then we went to show Evan and Elijah where Mica's school is. We played at the park. This is where I got most of my pictures. Enough to fill up the rest of my memory stick. It's supposed to be warm today, but it's not! :(

My cutie Isaak playing. It's fun to watch the little guys play! They get so excited! They are always like, "Look Mommy!" 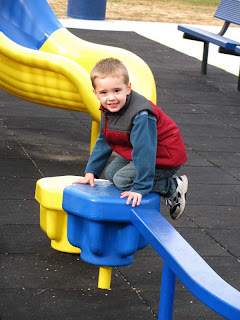 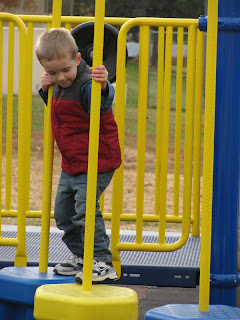 Here Isaak was like, "Put the camera down and help me Mommy!" 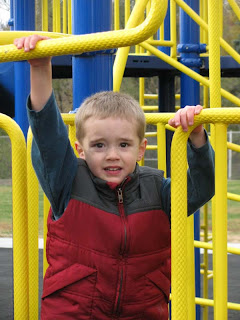 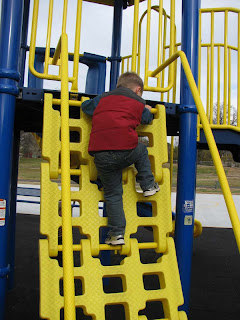 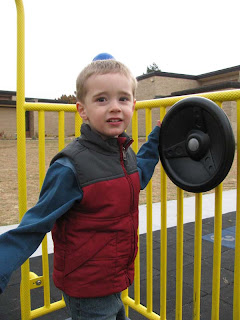 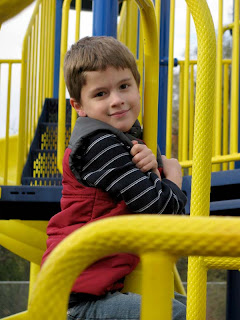 Then the punk side of Mica came out again! Isaak and Mica were talking in one of these: 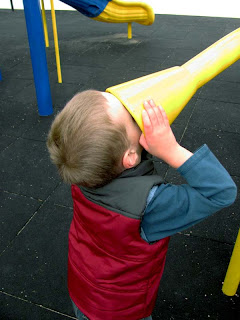 Mica said a cuss word! He had to sit out! He wasn't too happy! I wasn't too happy. It was then that I decided Mica would go down for a nap in the afternoon no matter what! 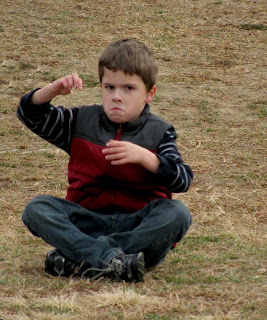 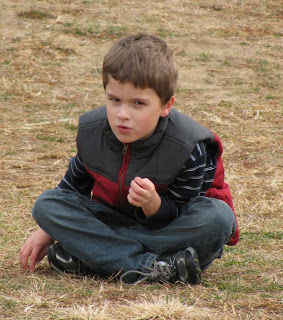 Evan was excited that he could finally work the Monkey Bars. 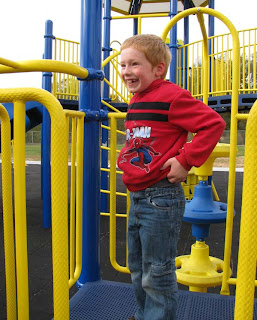 I love this picture because all four boys are in it! I know Evan and Elijah are not looking, but hey they are in the shot. 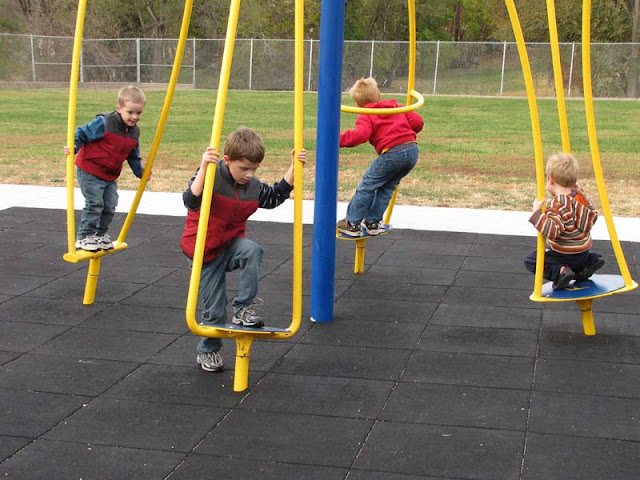 I dropped the cousin's back off at home, we went grocery shopping, ate lunch and Mica was told to go to bed. I've barely heard a peep out of him. Isaak and I read A Hungry Little Caterpillar and he went down to! Ahhh...piece in the house!
Posted by An Apel a Day at 2:27 PM

Love Isaak's new haircut. He looks like a little boy now and not a toddler. I know it's a shock when they get all their hair cut off. My grandson's hair was about as long as his and when his mom brought him by after the haircut it was a complete shock. Only because I wasn't expecting it.

How much fun a faux camp night would be for the kids.

Boy does Mica look MAD in those two pictures.... If looks could kill.

When my Granddaughters were young and I was baby sitting them, one of them said the F word. I had drank a little bit of wine that my sister had made.... anyway, I told them... Tomorrow I am going to wash both of your mouths out with soap. And I did. Maybe not a good thing to do, but they don't swear in front of me to this day.

@ Grandma F- I like Isaak's hair both ways. He's had his hair short once last year at this time. Not as short, but it was short. I kind of knew how it would look.

I know I'll miss the variety. I liked having one kid with short hair and the other with longer hair. Not so long it could be put in a ponytail though.

Mica head sweats and has cowlicks, so longer hair has always been out for him.