I forgot to do a recap of conferences. I started this blog as a way to jot things down for the kids. If you're not interested...move on to a different post.

My kids do really well in school, so this will be more of a positive post.

We let the kids play on their Kindles in the hallway, while we venture in to talk to each of their teachers. 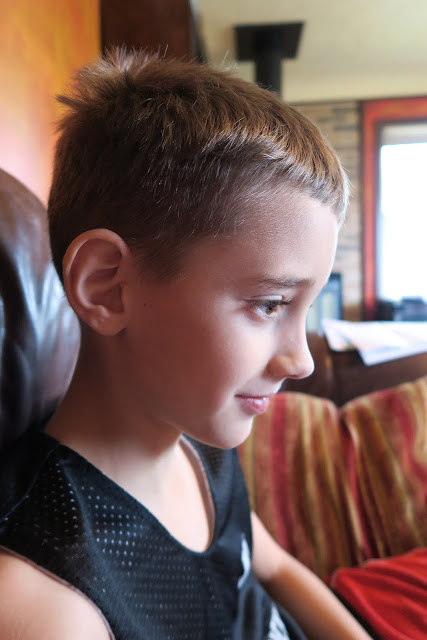 Isaak does well in school. He got all O's and S's, which stands for outstanding and satisfactory.

He has had some unfortunate events happen with bully like behavior from other kids. His teacher doesn't think this has anything to do with how Isaak acts. It's just punks being punks. Isaak just so happened to be in the way.

Isaak is like me - a slow test taker. Other kids fly through their test in 45 min. Isaak on the other hand will be in the room for 2 hours. :( If you know of any websites that have tips on test taking I'll be happy to check them out! I have art students that struggle with test taking as well. I'd like to just know about tips for them too. Apparently ultra creative minds are slow test takers. At least that's my experience. Is it because their minds wander? Is it because they can't focus on the boring thing they just read? I don't know the answer exactly. I do know that they should up the interesting articles on standardized tests. Seriously!

Isaak tested high for math, but only 77% for reading twice this year. The tests did get harder the 2nd time. That's way below what his teacher thinks he's at in the classroom. He's one of her higher students.

At home we're going to push reading different types of books. He got stuck on Boxcar Children, and never wanted to move to different books. I'm actually going to read to him more. I kind of stopped that when he could read on his own well.

His teacher was really excited to talk about Benjamin. J is pronounced like like an h, min is pronounced like mean. His teacher now says Benjamin's name right. She loves watching the 2 play together. She says Isaak uses a lot of hand gestures to communicate when it's quiet time. Benjamin will go up in line when Isaak points. Then he'll start to tap and poke at Isaak to play. Isaak laughs, but puts his hands down, stands up really tall, and faces forward to show Benjamin it's time to be quiet. We learned that Benjamin is from Argentina from his teacher. At his Banister Leadership Camp Isaak picked Argentina as the place to research this week. He was so excited because he's never picked the place - someone else always has. One day Isaak really researched Argentina! He had 2 pages of stuff written down. Mica snapped at him for copywriting. I said, "Mica he hasn't learned about that yet. Let him be!" Isaak wants to have Benjamin over, but it's hard because he and his parents don't speak very good English. I'm so proud of him for taking this little boy under his wing!
Posted by An Apel a Day at 10:58 AM

When I was a kid we had O's and S's too, but my girls have always had letter grades. Glad the report is good!

Yay for Isaak to continue to take Benjamin under his wing. Maybe they'll be lifelong friends!

haha. Like Isaak, I remember getting stuck on the Boxcar Children series. It took a teacher recommending I branch out for me to discover other books. Hopefully, Isaak will learn to love a variety of books like I have. I think it's wonderful that you are wanting to read with him. Even though he can read, I still think reading together is a great way to spend time together. :)

And of course, I love hearing about how Isaak interacts with his Argentian friend. Given the currently political it brings tears to my eyes anytime I hear about someone branching out and trying to reach another that they are culturally different from, whether that is in language, in actions, etc… :)

That is sweet that he's taken the child under his wing. It's so hard when the children speak a language no one else does. Hurrah for good conferences too! We just had that here as well. :)

Bravoooo, kiddos! We are also very happy with the result..my daughter got the honor roll :)